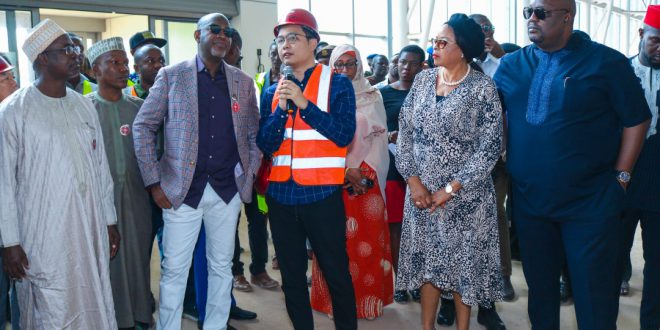 MINISTER of Aviation, Senator Hadi Sirika today expressed satisfaction with the work being done so far at the Akanu Ibiam International Airport, Enugu with the parameters given; stating that the contractor, Messrs PW, will meet the Easter deadline by government.

This is just as the Minister has insisted to the contractor handling the new terminal building at the airport that the building must be completed before the year’s end.

Sirika said,”What is my assessment? Honestly, I am very satisfied with the work according to the work approved. We are beating the deadline, that is sacrosanct, we are bringing the runway before Easter.

“We are confident that the contractor, Messrs PW are capable to deliver this procurement. This is not the only job they have handled as they are currently doing some work in Lagos too and have a lot of experience when it comes to runway construction.

” We take this job seriously knowing that the future of this country cannot be mortgaged so if assignment is given it should be delivered. This is not the first terminal handled and I guarantee you by the time we are done with Enugu, you will be proud of what we have done at the airport. They will get the runway in time for Easter festivities.

” We know the importance of this airport to the South East.

On the terminal building at the Enugu International Airport solely funded by the Federal Government he insisted to the contractor inspector, Mr. Toby Luo that all procurement should come in and the terminal delivered 2020.

The Enugu terminal unlike the other four international terminals (Abuja, Port Harcourt, Lagos and Kano) is solely funded by the Federal Government.

Deputy Governor of Enugu State, Cecilia Ezeilo who was also part of the inspection told the gathering that Enugu state Government will continuously support the Minister in this venture.

Chairman House Committee on Aviation, Hon. Nnolim Nnaji said the legislative arm will continuously carry out it’s oversight functions and do all it can to ensure that everything works out.

Nigerianflightdeck is an online news and magazine platform reporting business stories with a bias for aviation and travel. It is borne out of the intention to inform, educate as well as alter perceptions with balanced reportage.
Previous Air Peace gets 3rd IOSA certification, to commence Ibadan flights from Abuja, Owerri; Kano
Next Minister enters 2020 with commitment to Enugu Airport Runway repairs