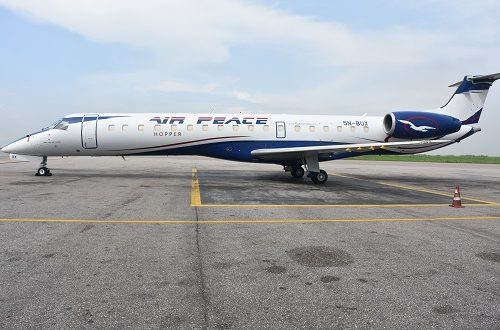 AIR PEACE has announced commencement of Abuja-Warri-Abuja flights as part of plans in keeping with its vision to provide seamless connections to Nigerians.

The airline’s Corporate Communications Executive, Stanley Olisa, disclosed this in a statement released on Thursday, January 9, 2020 revealing that this new connection is operated daily.

He noted that Air Peace has provided a direct connectivity between the two destinations adding that the airline kicked-off the new connection in response to requests from Nigerians asking for flight connections between both cities.

“Air Peace is determined to interconnect every part of Nigeria. It is our own way of uniting our nation and promoting healthy socio-economic exchanges between different cities”, he affirmed. Olisa stated that the airline has new local and international routes in the offing, including Ilorin, Makurdi, Ibadan, Congo DRC, Congo Brazzaville, Douala and Johannesburg. He asserted that the airline has a ‘no-city-left-behind’ initiative which is driving its rapid route expansion.

The spokesperson restated the airline’s commitment to providing its customers with best-in-class flight experience, adding that some of its planned routes will be activated in the first half of 2020. It can be recalled that Air Peace, just in December 2019, announced that it will begin flights into Ibadan from Kano, Owerri and Abuja.

Nigerianflightdeck is an online news and magazine platform reporting business stories with a bias for aviation and travel. It is borne out of the intention to inform, educate as well as alter perceptions with balanced reportage.
Previous Despite acquisition of $8.5m calibration aircaft NATCA worry over degraded NAVAIDS
Next NAMA says BA diversion to Accra, unnecessary, navigational, landing aids serviceable