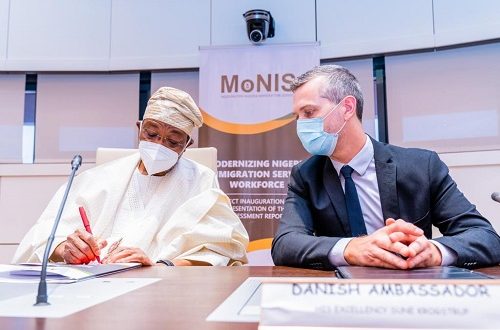 Minister of Interior, Rauf Aregbesola and the Danish Ambassador in the capacity building partnership between the Nigerian Immigration Service and International Centre for Migration and Policy Development held in Abuja

The Project tagged: “Modernizing Nigeria Immigration Service’s Workforce (MoNIS)”, which held yesterday at the Service Headquarters Abuja is one of the capacity development funding interventions from the Danish government and implemented by ICMPD.

It is targeted at supporting the Service in institutional reform efforts with a view to modernizing its Human Resource Management system and improving Personnel efficiency and quality service delivery.

Speaking at the occasion, the acting Comptroller General, Isah Jere Idris stated that the Service has continued to demonstrate huge commitment to capacity building of the workforce for enhanced productivity and workplace harmony.

He noted that the Service is deliberately aligning its training and career development activities into a clear career path framework for improved efficiency as well as promote gender mainstreaming. This is where the interventions from agencies such as ICMPD remain very important to the Service, he quipped.

He further stressed that “some of the fundamental topics of our time in both public and private work environment are the issues of career progression and gender equality. This he said is largely because the changing realities of our society have made these subjects increasingly crucial to the motivation of employees as well as equal treatment and opportunities for the female folk”.

The acting Comptroller General noted that the Service is one of the most gender friendly government agencies in Nigeria with a record of two women who have led the Service as Comptrollers General of Immigration. He reiterated that women Officers do not have any career limitations in the Service as five of them are currently heads of Directorates while many others are heads of Commands and Formations.

He thanked the Danish authorities for sustaining the existing healthy relationships and the ICMPD for their strong commitment to project implementation.

In her remark, the Regional Head of ICMPD (West Africa), Mrs. Mojisola Sodeinde said that the project is aimed at supporting the NIS in drafting key Policy Documents, Personnel Guidelines, training Curricula as well as Operational directives which will form the basis for developing an efficient, competent, better performing and productive workforce that is ready to face the complex challenges of an increasingly difficult work environment.

In his keynote address, the Minister of Interior Ogbeni Rauf Aregbesola described the Project as an excellent initiative stressing that capacity building is the heart and soul of every organization. He enjoined all Personnel to take good advantage of the Project to not only improve themselves but also make quality contributions to the Service and the country as a whole.

One of the major highlights of the event was the formal inauguration of the Project Steering Committee/Technical Working Committee by the Minister of Interior, Ogbeni Rauf Aregbesola.

Nigerianflightdeck is an online news and magazine platform reporting business stories with a bias for aviation and travel. It is borne out of the intention to inform, educate as well as alter perceptions with balanced reportage.
Previous NiMet alerts on poor visibility in North, gives general weather overview nationwide
Next NCAA, Captain Nuhu in harvest of awards