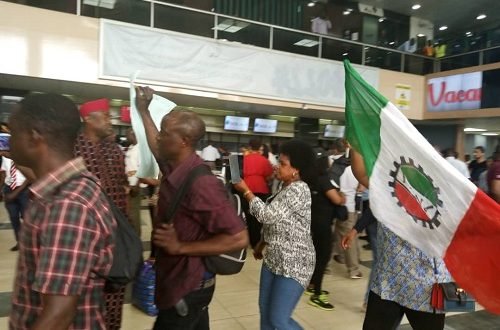 Unions marching around the MMIA during the picketing of ASL

PICKETING continues in front of Newrest ASL as the National Union of Air Transport Employees ( NUATE) has been joined by the Nigerian Labour Congress ( NLC) Lagos Chapter and the Nigeria Union of Railway Workers chanting solidarity songs and vowing not to retreat as negotiations are yet to take place.

Nigerianflightdeck learnt that the unions have been on the matter for 8 days now and their aim is to end what they described as the inhuman and unlawful work conditions at the catering company. 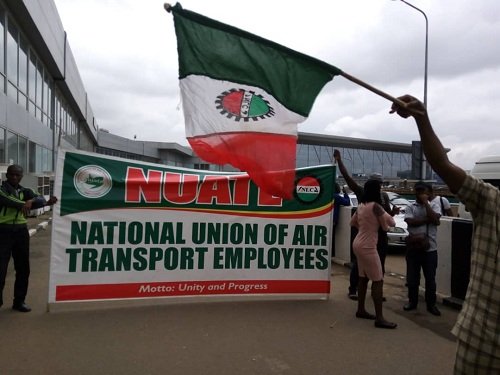 Recall that NUATE had issued a letter to Newrest ASL on July 30th 2019 directing that the catering company stop victimising and sanctioning workers and allow them their fundamental right to association as labour laws allow.

Secretary General of NUATE, Ocheme Aba, who spoke on the recent siege said management has refused to speak to the unions and so it will continue to escalate the action.

According to him, the unions currently holding Newrest ASL under siege have not achieved its aim and with the NLC with it there was no going back.

On the demands, Abba said ASL should respect the constitution of Nigeria Section 40 as well as recall the sacked union leaders in the company stating that they ( union leaders) have been relieved about 18 months ago and that management can’t continue to victimize the workers.

Nigerian Union of Railway Workers General Secretary Segun Esan confirmed that the union were at Newrest ASL in solidarity with NUATE to address an issue concerning the recalcitrant management.

According to him, the action is a direct response to a breach as it concerns the welfare and wellbeing of the workers.

NLC Chairman, Lagos state branch, Agnes Funmj Sessi, who was also at the rally stated that once the union is united it becomes indivisible and can never be defeated.

She declared that they would never give up until the aims are achieved stating that management must treat the workers right.

The unions, according to NUATE’s July 30th letter is protesting inhuman and unlawful conditions of work at Newrest ASL. Such conditions include but are not limited to refusal to recognize recognized trade unions, refusal to allow employees exercise the fundamental right of freedom of association, victimization of employees on the basis of joining, sanctioning employees and other forms of enslavement.

Nigerianflightdeck is an online news and magazine platform reporting business stories with a bias for aviation and travel. It is borne out of the intention to inform, educate as well as alter perceptions with balanced reportage.
Previous NANTA hosts KATA in Lagos to discuss mutual opportunities for both agencies
Next Policy makers recognize urgent need for licensing ATSEP