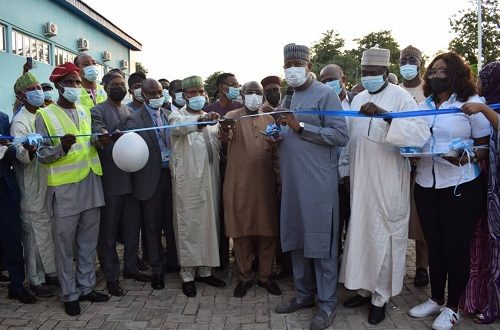 THE recently acquired N1.7bn mobile control towers procured by the Nigerian Airspace Management Agency (NAMA) will be used as stop gaps at the Lagos, Port Harcourt, Abuja and Kano airports while hardware and software upgrades take place in the existing control towers.

Director of Operations, NAMA, Mr. Mathew Pwajok who made this known to newsmen recently also said that apart from the two newly acquired mobile control towers there are two existing mobile towers of which one is currently in Abuja providing ground control services because the international tower, the presidential tower is obscured by the new international terminal building.

According to Pwajok, the benefits of the towers range from being contingency equipment to equipment deployed in times of emergency and special situations like what the mobile tower in Abuja is doing. READ ALSO: Procurement of N1.7bn mobile control towers to be deployed as contingency- Sirika

He said, “We have an approval by the federal government to do an upgrade of the existing control towers, at Lagos, Port Harcourt, Abuja and Kano, we call them the safe tower project and upgrading them will take a hardware and software upgrade and while doing that we will not be able to use the facilities we are trying to upgrade, so this is why this is strategic for contingency where we will locate the provisions of air traffic services or control tower services to it depending when we finish the hardware and software upgrade of the four control towers.”

On number of mobile control towers to be acquired, Mr. Pwajok said two have been acquired and another two is expected while stating that the old mobile control towers before the procurement of these they were still operational and are currently in use in Abuja and Maidiuguri because of unique situations there.

According to him, as Maiduguri control tower is set to come on line, the mobile tower there will be decommissioned and relocated to be overhauled.

Pwajok said,” At  the moment, we have acquired two and two more are expected so we can have at least strategically for the four major airports but for now we have acquired two…the previous ones are still functioning, one is in Abuja providing what is called ground control services because the international tower, the presidential tower is obscured by the new international terminal building, so the mobile  tower one is in Abuja for ground control to supplement the view of the air traffic controllers at the international terminal and presidential terminal.

“The second one is in Maiduguri, it is there as contingency to provide air traffic services, we plan to recover that and overhaul it because they have prepared the Maiduguri tower so the mobile tower would be relocated to headquarters and be overhauled.”

He said it also has three locations: one for ground controls, another for aerodrome control and a third provision for approach control which can provide a one stop shop solution for ATC in the event that we have anything affecting the use of the existing tower in Lagos, Abuja, Kano, Port Harcourt and anywhere in Nigeria.

The facility also has automatic weather where you can see the prevailing weather affecting the location where the tower is deployed. So if it is Lagos you’d be able to see the weather location in Lagos: temperature, cloud base, wind direction, relative humidity so it’s a one stop shop for it.

While speaking on where and when it can be deployed Pwajok said,” The mobile tower like the name implies is a tower that is mobile, transportable control tower and the primary objective of it is to serve as a contingency equipment, like when you have a situation affecting the use of the existing control tower this can now be used to temporarily relocate air traffic control services to mobile tower

“This can also be moved where you don’t have a control tower or if the tower is affected by any natural disaster or assuming also the pandemic which we are trying to get out of, if you have a case of an infection in a control tower, you have to relocate the personnel and move the provision of that service to another location and this wouldn’t have come at a better time than now, it is a strategic facility.

“ If you have a control tower infected by COVID-19 and any other contagious or communicable disease, the service will be relocated, the tower is decontaminated and the rightful procedure or protocol observed and after decontamination you can move back. So this mobile tower provide a strategic back up for any tower,” he said

Nigerianflightdeck is an online news and magazine platform reporting business stories with a bias for aviation and travel. It is borne out of the intention to inform, educate as well as alter perceptions with balanced reportage.
Previous 25th LAAC Conference: Captain Pam, Adigun, Abdulmutalib to provide insight to theme
Next SAHCO promises customers improved services; reflects on annual performance