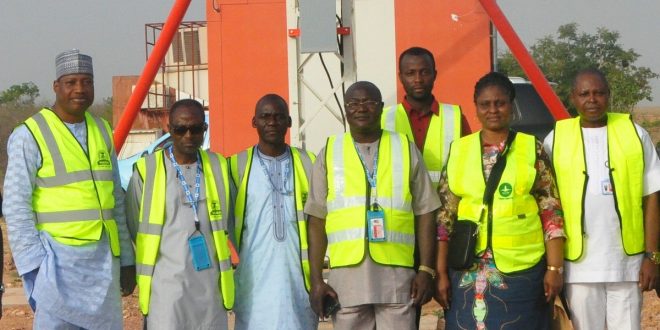 NAMA MD, Capt. Fola Akinkuotu (2nd left) flanked by Director Safety, Electrical and Electronic Services, Engineer Farok and other top officials of the agency during an inspection tour of navigational facilities at the Kaduna airport recently.

THE Nigerian Airspace Management Agency (NAMA) has described as misleading reports from a national daily, This Day newspaper over what it called grossly unsubstantiated allegations about the serviceability and capacity of the nation’s navigational facilities.

The agency in a reaction to the report said its attention was drawn to a scandalous, mischievous and totally misleading publication in This Day Newspaper of 5th May, 2017, page 19 and 20 with the heading: Pilots Warn of Imminent Disaster over Poor Landing Aids, in which the author, one Chinedu Eze made the alarming and wrong allegations.

NAMA in a statement signed by Ag General Manager, Public Affairs, Mrs Olajumoke Adetona read in part,” Ordinarily, we would not have dignified such an alarmist and attention-seeking write-up with a response, but it behooves us as an agency saddled with the statutory responsibility of managing the nation’s airspace to put things in proper perspective, for the benefit of the unsuspecting Nigerian public. Chinedu Eze in the said publication alluded to a “warning” by some faceless and fictitious “Nigerian pilots” about looming tragic accidents due to “poor, obsolete or lack of critical landing aids,” adding that the said nameless pilots “have consistently complained of their inability to communicate in the Nigerian airspace due to epileptic network radio frequency.”

“He goes further to allege inter alia that Nigeria does not have Category Two and Three Instrument Landing Systems (ILS) which could land aircraft in bad weather and that “most of the existing ILS are either malfunctioning or are in epileptic performance.”

“In fact, our take from the above porous allegations is that the said Chinedu Eze is either thoroughly ignorant of the massive investments made by NAMA in ensuring the present safety level of air navigation in Nigeria or that he is on a mission to cause mischief and disaffection within the aviation industry and also cast a pall of fear and insecurity in the minds of the flying Nigerian public.”

“First of all, NAMA as the nation’s air navigation service provider has always adhered to the cherished rules and regulations of the International Civil Aviation Authority (ICAO) which Nigeria is a party to its charter. Before the closure of Abuja airport for repairs of the runway recently, the ILS/DME and VOR/DME in Kaduna, Kano, Katsina, Sokoto, Lagos, Enugu, Port Harcourt and Bauchi airports were calibrated by South African Flight Calibration Company (FSCL) and all the facilities presented were certified as operating optimally without restriction and within ICAO specifications.”

Reacting to the publication, the Airspace Manager of Murtala Mohammed International Airport Lagos, Mr Lawrence Ajayi refuted claims that ILS at Runway 18L and 18R were unserviceable. According to Ajayi, Runway 18R has precision approach lighting system which is one of the best in the industry, while 18L has simple approach lighting system because it is not busy at night, saying that both of them are working at optimal levels. On the radios, he said Radio Frequency 127.3mhz has an improved range and is working perfectly just as the Radio Frequency 124.7 mhz is also in good condition and both of them are on presently.

Debunking claims in the said publication, the Director of Safety Electronics and Engineering Services, Engr. Farouk Umar said in aviation, there is nothing like epileptic communication.” It is either you are communicating or you are not communicating. If this were to be true, international flights would not have been coming into the country. Nigerian airspace is safe for both local and international flights.” He stressed further that “it is absolutely not true that some areas in the airspace have no communication at all.”

On the issue of ILS, Farouk said all the agency’s ILS are on Category Two, lamenting however that “most of the aircraft in the country do not even have the facilities to fly Cat3 because the aircraft need to be equipped with Cat3 facilities to be able to land in zero visibility, just as pilots themselves need to be trained on Cat3.” The truth according to Engr. Farouk is that “the ILS we have, you need other facilities at the airport and in the aircraft to complement them while the runway and the airfield lightings are not within the control of NAMA. Our ILS is Cat2 and the visibility minima is 800 meters which is okay.”

While advising journalists to check their facts well before rushing to press, Engr. Farouk assured that the Nigerian airspace is as safe as it can be anywhere in the world adding that the relative safety in the nation’s airspace over the last few years is indicative of the fact that NAMA is alive to its responsibilities.

Nigerianflightdeck is an online news and magazine platform reporting business stories with a bias for aviation and travel. It is borne out of the intention to inform, educate as well as alter perceptions with balanced reportage.
Previous UBA modernizes mobile payments with *919# magic banking
Next NCAA gears up to prosecute unruly passengers