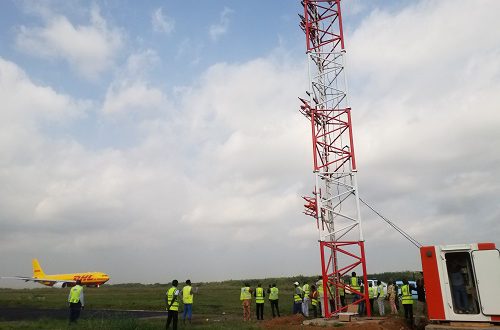 Speaking at the commencement of the test run, Managing Director of NAMA, Capt. Fola Akinkuotu said the agency was responding to the clamour by airlines for better navigational facilities in Nigeria.

“The deployment of CAT III ILS will reduce the landing and takeoff minimas. The landing minimas are based on the fact that you are coming from somewhere and you are able to land while the takeoff minimas are predicated on certain aspects, among which is your ability to take off and if need be, you are able to land back to where you took off. Because we have better equipment, it will lower both minimas, so we expect to see an improvement in flight operations in the country in the coming weeks and months,” Akinkuotu said.

Akinkuotu further said that the alignment of the facility had already been done by NAMA engineers.

This, according to him was to ensure that the equipment allied with the centre line of the runway and also that it is aligned with the descent path that will be comfortable to arrive the threshold at a good landing height to make a normal landing.

He continued, “In a couple of weeks, we will bring a calibration aircraft to fly in and certify that the equipment is good to go.’’ He said according to the timelines, CAT III ILS would be available at both Lagos and Abuja airports by the third week of December 2019.

Nigerianflightdeck is an online news and magazine platform reporting business stories with a bias for aviation and travel. It is borne out of the intention to inform, educate as well as alter perceptions with balanced reportage.
Previous Air Peace bags Company of the Year Award
Next Dana Air clocks 11, rewards passengers, recounts achievements