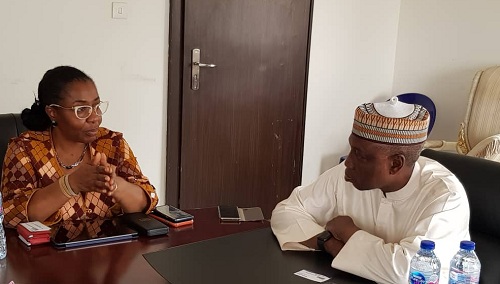 This is just as the Group Managing Director of Nahcoaviance, Mrs. Olatokunbo Fagbemi has said that the handling company has set modalities in place to defray its debts as it intends to keep its books current.

The nahcoaviance boss who made this known while speaking to the Managing Director of FAAN, Engineer Saleh Dunoma, said that plans are already underway to pay the agency monthly to ensure that the debt is defrayed in the shortest time possible.

She said,”Our journey from Lagos is a very simple journey, our story is simple but essentially first is to say thank you, we have received substantial support from FAAN in the last few weeks on an issue that has been pending for a while and I believe we’d be able to find common grounds it has to do with safety and security around the air cargo complex. ‘

The other thing is, before I got in we were owing a lot of money but I said we need to know that we can’t ask for things if we are not paying because so we are saying thank you for that support. We have been able to work out something with the director of finance so we pay every month, hopefully we believe that by the end of this year we will not owe, we will keep our books current. we have to say thank you because unto who much is given much is expected. ”

“We are going to clear the backlog so that doesn’t continue because if you want a lot of things from FAAN, you should also pay

She however highlighted some key areas of mutual development to the FAAN boss seeking his assistance to correct certain trend that could hamper both their businesses including crowd control and others both at Lagos and Abuja Airports.

“We need to safe guard our business and we need to operate at an international standard.”
She also commended the FAAN management for the rapid changes ongoing at trhe nations airports stating,”A lot of things have been done at the airport and no one can go around any of the airport and walk away from the airports without noticing any positive difference.”

Reacting, FAAN MD, congratulated the new GMD and went down memory lane stating that the airport authority would do all in its power to support nahco especially since nahco used to be a part of FAAN before privatisation.

He also said FAAN would look at Nahco’s requests on the Lagos and Abuja cargo areas critically stating that the ground handlers were critical to safety and security around the airport.

Dunoma said, “Nahco and faan used to be one and so whatever nahco brings to the table nahco is an attachment of FAAN, FAAN created nahco and in the wisdom of government, they decided nahco be privatized. Privatization is done, nahco is a success story till date so whatever nahco request, we have little reason to say no because you started with one statement, our success is your success and your success is our success, so it has to be a win-win situation, so we continue to support you and do everything possible to assist you improve your business because if you look at your operations of nahco it is critical to the operations of FAAN.

You cannot separate the two, if you fail, we fail because you handle so many things at the airport, so we have to look critically at areas where FAAN needs to come in and support you.”
“We need to work together, I know they are some requests that would require some processes, we can fast track those processes and if there are huge calls in terms of implementation, you can come back to us and we will surmount this.”

Nigerianflightdeck is an online news and magazine platform reporting business stories with a bias for aviation and travel. It is borne out of the intention to inform, educate as well as alter perceptions with balanced reportage.
Previous Emirates introduces daily flight to Abuja June 1
Next NCAA charges Telecoms operators to offset hundreds of millions in accumulated debt