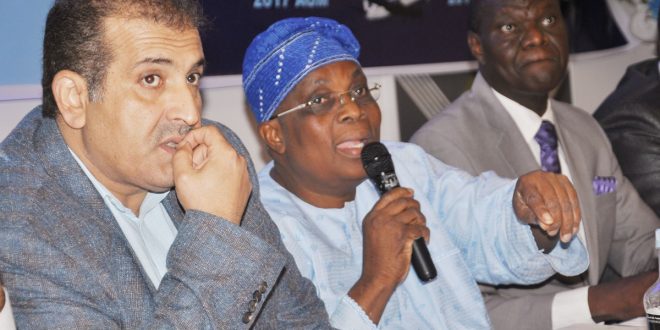 BASED on the dividends approved by shareholders, Medview Airlines PLC will pay 3kobo per every 50 kobo ordinary share to its shareholders from May 19, 2017 with plans to improve on the figure at the next financial year.

Chief Executive Officer of the Airline, Alhaji Muneer Bankole made this known at the 2016 Annual General meeting (AGM) of the airline at the Renaissance Hotel in Ikeja where it reeled out its annual reports and financial statements to its pleased shareholders.

The Medview CEO who responded to questions and input from the shareholders gave a short-term forecast for the year stating that Medview will acquire three aircraft to strengthen its international operations.

According to him, the aircraft will include a Boeing 777-200 and a 737-800 to strengthen its entry into routes like Dubai.

Bankole further told the shareholders that Medview has acquired four aircraft, owned by the shareholders and not leased. This he said is part of the airline’s drive to secure its existence.

“we now have four aircraft owned 100% by you, the shareholder. We got this because we are disciplined and are using the money invested wisely.”

The Medview boss also explained that the airline has gone ahead to acquire landed property in choice areas in Ikeja and also plans to relocate its corporate headquarters as it will build a six storey building which has been approved by the state government.

explained that hajj has been a major earner for the airlines and assured that with this coming hajj, the airline will show itself once again a leader in that area after 10 years of hajj operations.

“on hajj we are here to assure you that the consolidation of this airline is not in doubt. 10 years of consistent operations, this is why the hajj figures go up to over 300,000 and we assure you that this year’s hajj will be better.”

On assurances to thrive on the stock market despite airlines failures in the past, the Medview boss explained that it will not go the way of other airlines that have come and gone in the past as it has an average of forty years’ experience on the running of the airline.

A shareholder, Mr. Boniface Okezie commended the airline for listing under harsh conditions of the market and still being able to pay dividends stating that it was signs that if it continued on the right track it would increase shareholders’ dividends when they met next.

Nigerianflightdeck is an online news and magazine platform reporting business stories with a bias for aviation and travel. It is borne out of the intention to inform, educate as well as alter perceptions with balanced reportage.
Previous World AIS Day aftermath: NAMA to accelerate AIM implementation
Next Nahco aviance boss, Bielderman gives three months notice of exit