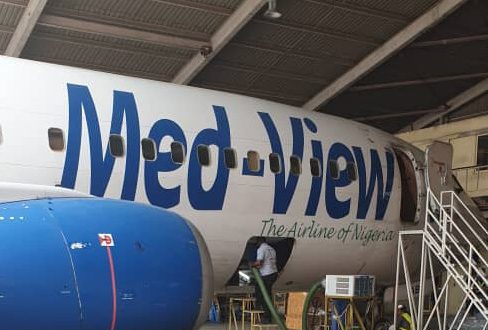 MED-VIEW Airline Plc management has explained the status of its aircraft stating that they are undergoing checks in Estonia and Aero Contractors, Nigeria debunking rumours alleging the airline has suspended operations.

A statement signed by the airline’s Chief Operating Officer (COO), Mr. Michael Ajigbotosho, read that Med-View has not at any time informed the regulatory authority (NCAA) or other any agency nor the press that its operations are suspended regarding the reports as tantamount to demarketing.

Ajigbotosho said, “At this time of the year, all those concerned or involved know that Med-View will concentrate her entire operations on inbound airlift of Hajj Pilgrims from Saudi Arabia to Nigeria.

“Our B737-500 (5N-BQ) aircraft developed a technical fault enroute Abuja a few days ago that requires engine replacement, and of which the engine has been procured and is being mounted to commence operation next week.

“Med-View Airline operates 3 B737 aircraft on its domestic route, until recently two of them – 5N-MAB and 5N-MAA were sent for C- Check at approved MRO in Estonia, Europe and Aero-Contractors here in Nigeria.

“The works are already at advanced stage, up to 85%, and expectedly, the aircraft will soon enter service on our domestic route.

“In the last 12 years of operation as Hajj carrier and domestic operator, Med-View Airline is profoundly known and widely recognized for its safety consciousness which cannot be compromised.

“Our airline is ever committed to its corporate value, which is ability to succeed in providing the desired services for customers ‘satisfaction and return on investment to shareholders.

“Meanwhile, the on-going rift between our airline and NAHCON is being handled by the Presidency.,” the statement read.

Nigerianflightdeck is an online news and magazine platform reporting business stories with a bias for aviation and travel. It is borne out of the intention to inform, educate as well as alter perceptions with balanced reportage.
Previous Visa on Arrival: Sources finger error in documentation, others as reasons for approval delays
Next Gambia returns to Nigeria for Tourism Marketing at Akwaaba 2019