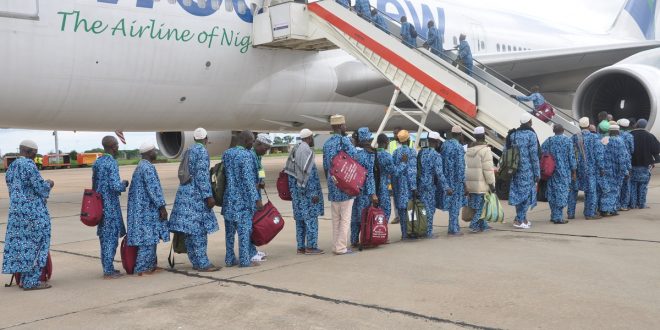 460 pilgrims from Kwara State were this afternoon airlifted to Saudi Arabia for the 2017 hajj flagging off the commencement of the holy pilgrimage from that state.

Kwara State plays rallying point for pilgrims from Ondo and Ekiti who are expected to be airlifted on a later date.

Speaking just before commencement of the airlift, Managing Director of Medview, Alhaji Muneer Bankole assured officials of the state that the airline would ensure a smooth hajj as well as return as is its character.

He called on officials of the state to partner and support the airline so that its pilgrims will continue to enjoy the very safest of flights in the most secure of environments.

“we intend to finish airlift in the next three to four days but we will be coming back on the 9th of August to airlift Ondo and Ekiti after those of Kwara.”

Nigerianflightdeck is an online news and magazine platform reporting business stories with a bias for aviation and travel. It is borne out of the intention to inform, educate as well as alter perceptions with balanced reportage.
Previous Minister approves promotion of FAAN senior management staff
Next Seek alternate source of funding AIB, ATSSSAN tells Minister