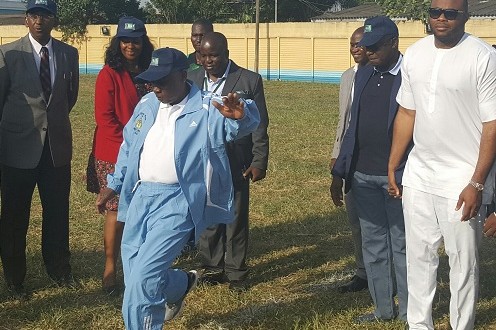 The Federal Airports Authority of Nigeria (FAAN) Inter-Directorate  Unity Cup, yesterday ended with a spectacular bang as the Managing Director’s Directorate clinched the coveted cup after beating the Directorate of Airports Operations by 2-1 during regulation time.

The MDD also won the N500, 000 reward provided by the sponsors, Sulah Bureau De Change for the competition’s winners.

The exciting match which was watched by fans and spectators all over at the prestigious Murtala Muhammed Airport Secondary school pitch saw a repeat of last year’s finals with the MD’s Directorate turning the table for a sweet revenge.

The MDD took the lead earlier and the first half through a mistake from the goal keeper  when Ali Muktar Danbatta scored and MDD doubled the lead after the keeper made another blunder, heading out a ball he was supposed to catch comfortably, while leaving his ranks open for the MDD to slot past him.

During the second half the DAO came back pulling a goal back through Waziri Abba but despite their best efforts they could not find the equaliser leaving the MDD winners of the 2016 Inter-Directorate Cup.

Speaking to reporters at halftime, the Chief of Staff to the managing Director, Mohammed Kabir said the games were key as it helped staff of the agency not only to relax but to recreate energising them and keeping them mentally alert.

According to him, the Inter-Directorate Cup is also a way of bonding and establishing a spirit of camaraderie among the staff of the authority.

Apart from the flamboyant football there was also cash rewards as the sponsors of this year’s competition, Sullah Bureau de Change doled out a cash price of N500,000 for the winners while the Second and Third  places got N300,000 and N200,000 respectively.

According to organisers of the competition, next year’s version will be bigger and better and all-encompassing as it would involve all the 22 airports operated by FAAN.

Nigerianflightdeck is an online news and magazine platform reporting business stories with a bias for aviation and travel. It is borne out of the intention to inform, educate as well as alter perceptions with balanced reportage.
Previous IATA cites low oil prices, increases forecast profit to US$39.4b
Next Sirika unfolds vision for Nigerian aviation