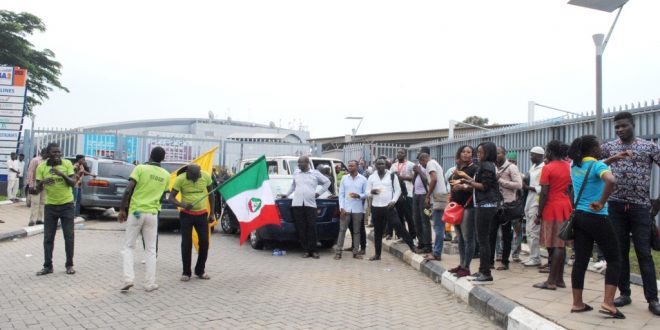 Labour strike: Foreign airlines may not be affected as Dana Air sets to reschedule passengers for free

NigerianFlightDeck 5th November 2018 Aviation News Comments Off on Labour strike: Foreign airlines may not be affected as Dana Air sets to reschedule passengers for free 60 Views

INTERNATIONAL airlines operating into Nigeria may not be affected adversely by the planned shutdown of activities in Nigeria’s airports, following agitation for wage increase by the nation’s unions scheduled to commence on 6th of November, 2018.

This however may not be same for local airlines operating the country as some have commenced rescheduling or rerouting their passengers flights for them to avoid impending aftermath of the industrial action.

Speaking with our correspondent on phone, Comrade Illitrus Ahmadu, President of Air Transport Services Senior Staff Association of Nigeria (ATSSSAN) said that if the tripartite meeting with the Federal Government failed, the unions would obey the directive of the labour centres and shut down the airspace.

He, however, said that the industry unions were not unmindful of existing Bilateral Air Services Agreement (BASA) arrangements Nigeria had with foreign countries whose airlines operate into the country, stressing that the issue at hand was a domestic one, which should not be allowed to affect international airline operators.

He recalled that during the fuel pump price hike of January 2012, the unions allowed international airline operators to reschedule their flights from 6am to 6pm, stressing that if the strike went on as planned, such treatment may recur.

He said: “The fact is that we are affiliated to labour centres and we are under obligation to comply with directives. So, from the strike notice issued so far, we are to shut down by mid-night of today. However, as we speak, the tripartite discussions have resumed; they are in a meeting and our hope is that something good will come out of the meeting so that we will no longer embark on the strike.

“You know, we are in a very volatile industry. This is our own national problem; we have several bilateral agreements with most foreign nations that their airlines fly into Nigeria. It is our domestic problem. We should not allow it to adversely affect the fortunes of the international operators. We have offered a corridor where we will accommodate them. The major shut down we have had in this industry so far was during the price hike of former President Goodluck Jonathan.

“You will recall then that in line with our respect for international obligations, we allowed a dispensation wherein the foreign airlines were advised to reschedule their schedules so that they can fly in within 6pm and 6am the following day. We are looking at that.

“We hope the discussions will go on well so that we will not have to go with the plan. We empathise with the industry; however, they must see where we stand that we are under obligations to comply with the directives of trade centres. We are monitoring, waiting and as soon as information comes, we will issue appropriate notices if there is a change of direction as regards area of notice.

“We should be able to reconcile our problem without adversely affecting the international carriers that we have BASAs with. We wish we could extend the same dispensation to the local industry, however, we have sat down in the past and we have argued this out.”

Meanwhile, one of the airlines that may be affected by the strike, Dana Air has assured its guests of its commitment towards ensuring that they do not bear the impact of the imminent strike action by unions.

The airline in a statement signed by it Media and Communications Manager, Kingsley Ezenwa, said the airline will available to reschedule or reroute its passengers at no cost to the passengers.

The airline rued the inconvenience of the likely effects of flight disruption on its passengers and the huge loss of income on its part, however appealed to the Federal Government and the organized labour to find a middle ground and resolve the issue in the overall interest of Nigerians and the economy.

‘While we regret the inconveniences on the part of our guests who are already on our scheduled flights for the week, and the likely loss of income on our part, we appeal to the Federal Government and the Nigerian Labour Congress to find a middle ground and resolve the issue in the overall interest of Nigerians and the economy.’’

‘At Dana Air, the comfort of our guest is paramount and we will be available on Phone, Mail, and on all our social media handles including WhatsApp (07051190363) to attend to all requests from our guests.’’

Tags Labour strike: Foreign airlines may not be affected as Dana Air sets to reschedule/ reroute passengers for free

Nigerianflightdeck is an online news and magazine platform reporting business stories with a bias for aviation and travel. It is borne out of the intention to inform, educate as well as alter perceptions with balanced reportage.
Previous Air Peace harps on strict safety standards as it resumes Kaduna flights
Next Relief for airlines, others as Organised Labour suspends strike