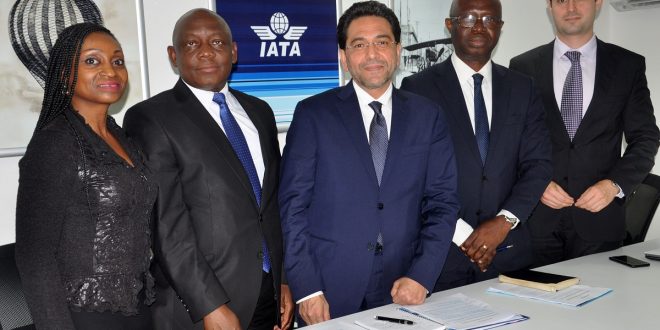 INTERNATIONAL Air Transport Association (IATA) has thrown its weight behind Nigeria’s positive infrastructural growth and the multiplier effect that growth is bringing to the table but insists the West African country can do more to unlock its aviation potentials.

The airline body also states that in the next 10 years, a 7% growth in global passenger market as forecast would translate to an additional 7.9 million passengers for Nigeria; creating a significant contribution to the US$8.2billion GDP the nation has and a substantial job boost.

IATA’s Regional Vice President for the Middle East and Africa, Muhammad Ali Albakri, made this known during the week as he leads a delegation from the global industry body, in a series of high-level meetings in Lagos with stakeholders across the Nigerian aviation value chain.

According to him, more jobs could be created and additional economic growth achieved in Nigeria if the West African nation used the transformative power of aviation as a strategic pillar to further strengthen and enhance its economic recovery and national development.

He stated,” Air transport in Nigeria supports more than 650,800 jobs including tourism-related employment, while contributing US$8.2 billion to the country ‘s GDP. Over the next ten years’ passenger volumes are forecast to grow more than 7% annually, exceeding the global average by a healthy margin. For Nigeria this means an additional 7.9 million passengers will take to the sky every year, creating significant opportunity to accelerate economic growth, boost prosperity and support development,” said Albakri.

“Despite significant investment in Nigeria’s aviation sector, the country’s air transport infrastructure still ranks low among African states. IATA recognizes and supports the positive developments by the government on infrastructure and aviation processes, urging continued adherence to international best practices and an optimal regulatory environment. Now that the country is emerging from recession, aviation can unlock the enormous economic potential that exists within Nigeria. We encourage the government to continue to promote aviation for its role as a catalyst and socioeconomic enabler for the country, and to promote stronger connectivity within Nigeria and its neighbouring African countries. In addition, now is the time to continue to invest in modern and efficient infrastructure to accommodate the future traffic growth that will occur,” he concluded.

During his visit to Nigeria, Albakri’s delegation will meet industry stakeholders from the Nigerian Civil Aviation Authority, the National Association of Nigerian Travel Agents, IATA member airlines based in Nigeria and other domestic and international airlines.

Nigerianflightdeck is an online news and magazine platform reporting business stories with a bias for aviation and travel. It is borne out of the intention to inform, educate as well as alter perceptions with balanced reportage.
Previous Seek alternate source of funding AIB, ATSSSAN tells Minister
Next Imo Air partners ELREEDA Foundation on CSR