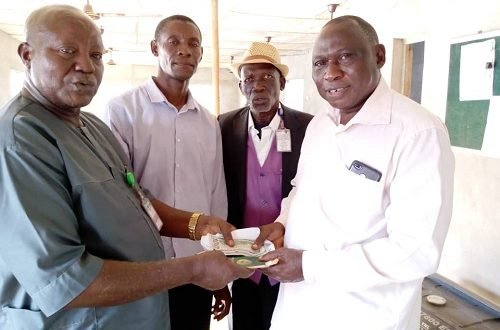 L-R Chairman ACHAN MMIA, Elder Olubi Ojo, the ACHAN driver who discovered and returning the money , Mr. Adeniyi Olatinka ACHAN officer on Duty Mr. Soele and the passenger Engr. Dele Ayeni at the ACHAN secretariat where he took possession of the money left in the airport cab on Monday.

A commissioned driver with the Airport Car Hire Association of Nigeria (ACHAN), Murtala Muhammed International Airport (MMIA), Lagos, Mr. Adeniyi Olayinka has explained how he found, returned the sum of $2,400 (N888, 000) and an international passport belonging to a passenger, Engr. Dele Ayeni who forgot the items in his car.

Olayinka who explained what happened told journalists that he discovered the items in an envelope left behind by the passenger on the back seat of the car shortly after he returned to the airport from Ibese Ikorodu destination of the passenger.

This happened on Monday.

Explaining how he found the money and the passport, Adeniyi who has been operating in the airport for fifteen years said: “At about 1:30 am on Monday I met this passenger on arrival at Murtala Muhammed International Airport, Lagos. I negotiated with him and we agreed at N6000 to transport him to his destination at Ikorodu. I returned to the airport immediately I dropped him at his house. But no sooner I arrived and parked my car at the airport I discovered that an enveloped had been left behind on the back seat of my car. I picked the envelope and opened it. What I saw was his international passport.

“I looked further into the envelope and discovered there was another white envelope inside. I opened the second envelope only to discover that something was wrapped in it. When I removed the wrapper I discovered it contained mint fresh notes of US currency. They were in $100 denomination. I counted and they were 24 in number totaling $2,400. When converted at prevailing rate of N370 as at Monday morning, it amounted to N888, 000.

“Based on the orientation and instructions we received from the leadership of ACHAN on weekly basis, I reported the findings to the officer on duty at the arrival car park of the airport. I was instructed to drop the parcel and its contents at our secretariat at Murtala Muhammed International Airport. Since I didn’t have the passenger’s phone contact, I had to go to his the place where I dropped him to inform him or his family member of the discovery. But by the time I got to the passenger’s home at Ibese – Ikorodu, I was told he had returned to the airport to look for the lost parcel. As I was leaving the house in Ikorodu, I got the call from our secretariat that the passenger was already in the airport to report the loss”.

Speaking on the recovery, the passenger, Engr. Dele Ayeni who said he was a living testimony to the advantages of taking cabs from registered point at airports, believe there is hope for Nigeria in many way.

He said, “I arrived Lagos, Nigeria from Cairo on July 29, 2019 at about 1:30 am on Monday. My intention when I arrived was to call an Uber operator to pick me home as soon as step out of the terminal building. But as I was coming out of the terminal, I met this polite driver who agreed totake me to my destination at Ikorodu at an agreed price of N6000.

“While on the way, I decided to drop my jacket on the floor of the car to avoid been notice as a very important man sitting in the rear seat of the car. Immediately we got to my house in Ikorodu; I removed my jacket from where I had kept it and also my luggage, without noticing that the envelope in the jacket had dropped on the back seat of the car. Unfortunately, I didn’t open my luggage to bring out what I had for my family members until after I woke up in the noon. That was when I discovered that the envelope was missing in my jacket. I exclaimed. I said all my suffering during the trip has resulted to total loss. My wife began to calm me down.

She advised that we should look around the compound to see if it dropped in the compound, but I said no that if it had dropped in the compound I would had seen it as I was bring in my luggage. I insisted that it didn’t drop in the premises but in the cab. My wife then asked me of where I took the cab; I told her it was in the airport and she advised that I should go to the airport to inquire if it has been found. I told her I didn’t know the name of the driver or the vehicle number.

” However, with her encouragement I came to the airport and went to the car park where I boarded the cab. Immediately I approached and complained to one of the drivers, who happened to be the duty officer for that shift. He asked me for my name and I told him. The next thing I noticed on his face was a broad smile; he then told me that the envelope was found in the car and has been deposited at their secretariat. And that the driver who took me home, had gone to my house again to inform me of the discovery.

” This is a living testimony that Nigeria has hope. We are not all bad people. I have started campaigning to people via social media to always patronize airport registered cabs. The advantages far outweigh the disadvantages. The registered airport cab may charge higher than Uber or Kabukabu but you are sure that if you forget anything in the airport cab, you would surely see it again. I want to thank ACHAN for having this type of arrangement in Nigerian airports. It is wonderful.

Speaking while handling the items recovered in the car to the owner, the Chairman ACHAN MMIA, Lagos Elder Olubi Ojo said Engr. Ayeni’s case was just one of the many cases the association handles on regular basis.

Elder Ojo who recalled that one of his members once returned $15,000 left by a passenger in his car, urged Nigerian passengers to place the safety and security of their lives and properties above any amount they may be charged by the registered airport cab operators because the benefits far outweighs the money paid.

“This is a regular occurrence in this airport, passengers forget many things such as passports, money and other personal belongings in our cabs, but they are very sure of finding them if truly the items are left in any of our cabs. We give regular orientation on why they should return to the secretariat any item found to have been left behind by passengers in their vehicles,” Elder Ojo said.

Nigerianflightdeck is an online news and magazine platform reporting business stories with a bias for aviation and travel. It is borne out of the intention to inform, educate as well as alter perceptions with balanced reportage.
Previous Topbrass CEO says technocrats not civil servants should negotiate BASAs
Next NAAE hosts 9th IFATSEA regional meeting in Abuja, seeks global aviation safety