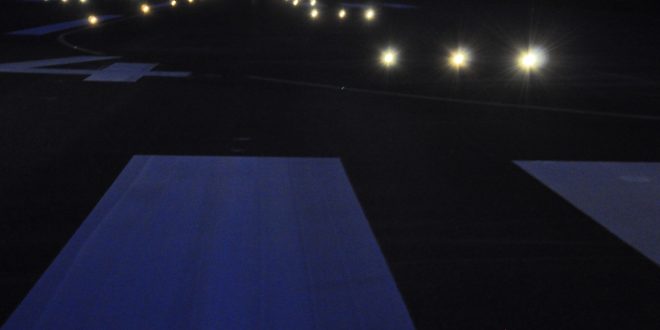 FOURTEEN gruelling years later and two approvals, it would seem federal government feels it is time to put in place Air Field Lighting ( AFL) for the 2.7 kilometre 18L/ 36R domestic runway of the Murtala Muhammed Airport ( MMA) which was recommissioned in 2008 after refurbishment and rehabilitation without runway lights.

After years of complains by domestic airlines cumulating to airlines in Nigeria listing the lack of lighting on that runway as one of the sixteen reasons flights are delayed or cancelled, it would seem something may be done soon.

Last week, Minister of Aviation, Senator Hadi Sirika, succeeded in getting another N3,523,592,079bn approval for safety-critical projects of the Ministry of Aviation.

The Federal Executive Council, FEC, approved the sum of N3,523,592,079bn for two different major projects on facilitation and airfield lighting.

Point number three and fifteen of airlines’ reasons for delays primarily dealt with sunset landing and lack of air field lighting in most airports but we’re particular about the MMA and the cost of landing at the international terminal to their operations.

The statement read,”Restrictions to sunset landing- Again, because of deficit of navigational and visual aids, most of the airports in Nigeria are open between 6am and 6pm. Once the airline misses this window as a result of one or more of the above mentioned ( other 16 reasons) airlines are forced to cancel scheduled flights to those destinations.

In February 2022, Chairman United Nigeria Airlines, High Chief Obiora Okonkwo during the airline’s one year anniversary had said the inability of the federal government’sovernment to resolve issues around and install air field lighting at Runway 18L of the Murtala Muhammed Airport in Lagos is reason there are delays and cancellations of flight as the Lagos airport and 80-90% of airports in the country run sunset operations hindering airlines.

The UNA Chairman while lamenting the challenges lack of airport facilities stressed that without AFL funds are lost with regards operating after sunset as Jet A1, which is another expensive component amounting 40% operational cost is spent taxiing and holding .

According to him, daylight operations alone restricts them and puts pressure on their operations as there isn’t enough time to properly schedule their operations and even when they do, they are at the mercy of the international Runway 18R mostly busy after sunset.

“There must be proper extension, these airports are there and if you don’t have the facilities to operate up to a certain time like 11pm-12pm and it costs the operators huge sums of money to operate beyond 6;30pm, there is no need for that and this leads to a lot of cancellation because if you have one or two hours left, you are already running out of time and if you dot get understanding for extension, you cancel your flights and your passengers start ravaging.”

“If you have 11pm-12am to operate to all the airports, passengers will get used to this and you will be at liberty to spread flight intervals and that will increase on-time performance and customer confidence,” he said.

Federal Airports Authority of Nigeria (FAAN) announced in August 2020 that the Air Field Lighting (AFL) of 18L Murtala Muhammed Airports will come on stream by 2021 with standard lighting and in August 2021, the airports manager said it and the Ministry of Aviation have agreed in principle for the Minister to resolve the contract issue delaying the 18L Runway light at the airport and once documents are complete it will procure and install the AFL in 6 months, that is where government is at on that.

Also recall, that on February 16, 2021 domestic airline Azman Air had a serious incident as its aircraft, a Boeing 737-500 with registration 5N-SYS named Sani Yunusa Sarina had a burst tyre on the Murtala Muhammed International Airport Runway 18 R/36L ( it had to land there as it was beyond 6pm to land on 18L) causing the busiest runway in Nigeria to be temporarily closed.

That closure exposed certain vulnerabilities in the system especially as it regards usage of the International runway by domestic airlines once the local runway is closed for daylight operations.

Due to the inability of the Federal Airports Authority of Nigeria (FAAN) to install Air Field Lighting (AFL) on the runway after it was rehabilitated and reopened in December 2008,  it has not tinkered plans to forestall events like what happened with the Azman Air serious incident.

FAAN had to shut down the international runway and reopen when the aircraft was removed, this happened during the height of COVID-19. Now, theoretically speaking, assuming flights were coming in normally that means these foreign airlines may have diverted to Kotoka in Accra or elsewhere because one of the country’s major runways has no AFL.

Captain Rabiu Hamisu Yadudu, the FAAN boss said a solution was in sight as agreements have been reached in principle but the delay was due to the fact that there is an existing contract that has been protracted for years now and government cannot approve a new project when there is an existing one on the same facility.

According to Yadudu, it was not negligence or lack of attention because as a government agency, FAAN had to follow due process.

He said,” …18Left has been delayed because of a current contract that has been for many years and finally, the honorable minister has graciously accepted to resolve that issue that has been protracted and he has agreed to grant us permission or approval to quickly procure a new lighting system.You know FAAN is a government agency; we cannot work and procure a new project when there is an existing one on the same facility. So many things you see that are delayed, are not delayed because of negligence or lack of attention it’s because you have to follow due process.

“It is however part of government regulations that you cannot procure the same thing twice until you resolve the first one. The ministry has resolved the first one and has taken over, freeing FAAN now with an approval to quickly resolve it because it is a critical requirement. So the key consideration for us here is that if not for the existing contract, we would have finished that before taxiway bravo.

With this recent FEC approval to the minister, one expects that the 2.7 km runway ’18 Left’ domestic wing of the Murtala Muhammed Airport, Ikeja, would come online and provide succour to airline operators and better yet cancel that out as a reason flights are delayed and/or cancelled.

Nigerianflightdeck is an online news and magazine platform reporting business stories with a bias for aviation and travel. It is borne out of the intention to inform, educate as well as alter perceptions with balanced reportage.
Previous Onyema gets LASG’s commendation for giant strides in aviation
Next NiMet, NIMASA sign MoU for marine, maritime safety