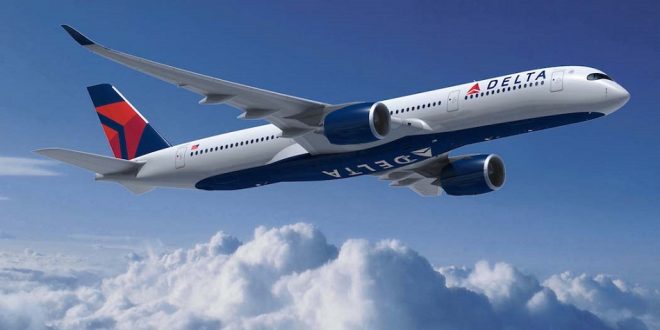 FIVE passengers were injured and many had to use the emergency slides to exit the plane onto the runway after a Delta Air line Atlanta-bound flight from Lagos, Nigeria was forced to turn back Tuesday after the plane experienced engine issues.

Delta officials confirmed that its Flight 55 from Murtala Mohammed International Airport in Lagos took off from the airport around 10:50 p.m. Nigeria time.

The flight had only been in the air for a little less than an hour and a half, and had only traveled 29 of its roughly 5,800-mile journey, before one of the A330-200’s two engines reported issues.

Delta in a reaction, said the flight landed safely shortly after midnight, but passengers had to use the emergency slides to exit the plane onto the runway. Airport fire crews met the plane on arrival, and passengers were bussed back to the terminal.
At this time, Delta said it is aware of five customers who reported non-critical injuries during the evacuation. The company said it’s now focused on trying to find overnight hotel accommodations for customers, and will likely rebook them on a Wednesday afternoon flight.
“The safety of Delta’s customers and crew members is always our top priority,” the company concluded.

According to reports obtained, the flight which initially pushed back at 22:40hrs had Air Return /Emergency landing at 23:16hrs, when the pilot in command (PIC) announced the evacuation of all the passengers on board within 90 seconds, after contacting the Control Towers because the left Engine of the Aircraft was said to have caught Fire mid air in-flight.

Passenger casualties were recorded and have been taken to LASUTH Ikeja, Air Force Base Clinic, and FAAN Medical Centre for speedy medical attention.

Meanwhile, the Delta Aircraft was still on the Runway for over 1hr which led to it’s closure before KLM, Lufthansa and Air France to depart afterwards. The aircraft was later towed with a push back truck to the open parking bay close to Boarding gate E 63. However the remaining  passengers were later taken to hotel after the flight was announced cancelled and rescheduled for a date yet to be specified and communicated.

Nigerianflightdeck is an online news and magazine platform reporting business stories with a bias for aviation and travel. It is borne out of the intention to inform, educate as well as alter perceptions with balanced reportage.
Previous RwandAir plans expansion into four African countries including Abuja
Next Delta begins airlift of unaffected passengers of flight 55 incident