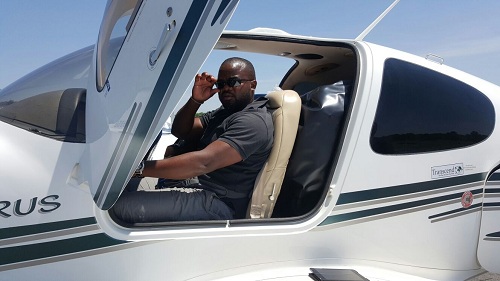 Finance, logistics may have stalled Nigerian’s Solo flight around the world-Investigation

NigerianFlightDeck 10th June 2016 Aviation News Comments Off on Finance, logistics may have stalled Nigerian’s Solo flight around the world-Investigation 653 Views

Investigations have revealed that the historical first African solo round the world initiative tagged One Man! One Plane! One World scheduled to have commenced since April 2016 has been stalled for about two months so far due to financial constraints and other logistic challenges.

Bits and pieces of information put together and a conversation with an aviation consultant during the course of the investigations show that the project may be suffering a setback as a result of potential backers backing down.

During Transcend’s first press conference in Nigeria, the team hinted that all was going according to plan and that potential investors were behind the project to kick off for April this year but Nigerianflightdeck findings indicate that most of the backers may have reneged and the organisers are thinking of rescheduling or maybe apologizing to Nigerians.

The team during its initial press conference had confessed that one of the major challenges they were facing in this venture is a  lack of sponsors, due most in part to disbelieve by the corporate world on the veracity and feasibility of the deed, which had already gotten the most strenous work out-of-the-way.

According to him, the flight is a noble gesture but there are certain logistic challenges especially when the organisers consider taking off from Lagos, Nigeria.

“The challenge here is how do they come out and explain what they are going through to Nigerians before people start reading the wrong meaning into what the true picture is. Let me give you some small data do you know that if that aircraft is taking off in Nigeria the insurance for it goes up?”

“Do you also know that it’s cheaper to start from say the United Kingdom the United States or even the United Arab Emirates as the cost of Jet A1 is far cheaper in those areas than what you get in Nigeria? Even the potential backers of this project may start asking ‘what is in it for me?’ and that will not help the cause of the project.

Nigerianflightdeck which have received a lot of query from its readers reached out to Transcend via mail and the team responded, “Please note that the team is working very hard to make this historic event a success.   A round the world flight involves overcoming many challenges and we have been delayed. We will be making a press release shortly explaining the situation. I thank you for your continued support and appreciate your interest in our project.”

The first solo flight by an African would, if successfully executed be the 114th successful flight around the world and would be piloted by a Nigerian, Mr Ademilola Odujinrin

The aircraft in use, the SR22 aircraft with registration number N313CD is nine years old, and has been refitted and upgraded to fly seventeen and half hours with special configuration before refuelling from its original 4 hour flight time.

The journey, will last for six weeks and is supposed to start from and end in Nigeria if all goes according to plan, but there is a possibility according to our consultant, that due to the harsh economic environment in Nigeria it may be cheaper for the flight to take off from else where

The Solo flight would fly through Cameroun, Kenya, Djibouti, UAE, India and Singapore, Australia as well as some islands among others.

Nigerianflightdeck is an online news and magazine platform reporting business stories with a bias for aviation and travel. It is borne out of the intention to inform, educate as well as alter perceptions with balanced reportage.
Previous Sirika, AON meet other sectors to find solutions to airlines’ plight
Next FG to decongest Abuja Airport, improve aviation security