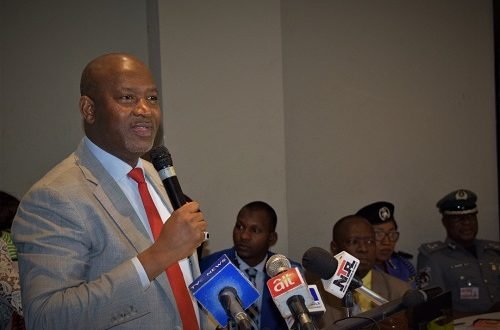 FEDERAL Government has said it may have to downgrade the Akanu Ibiam International Airport, Enugu or shut it down outright to enable it effect renovations on the airport runways to avoid any major incident.

This is just as the Murtala Muhammed International Airport ( MMIA) may be torn down and rebuilt with nothing less than N14 billion as the airport, according to him, has seen better days.

Minister of State, Aviation, Senator Hadi Sirika, made this known at 2019 Stakeholders’ Forum where he said he had made entreaties to the Enugu state government to aid the Ministry to carry out renovations of the runway to no avail.

According to Sirika, the state government was supposed to remove its state radio station mast at the runway, relocate its market which has an abattoir that attract birds and some a free trade zone at the edge of the runway that would aid repairs.

Sirika said,”We may downgrade Enugu Airport in terms of international airport. The runway is terrible. I have been there three times, seen the governor of the state and to.d them what to do but nothing has happened.

” there is a market and an abattoir there at the side of the runway. And this attracts birds. Of recent Air Peace suffered a bird strike and this affected the airline, thank God no major incident.

” at the end of the Enugu runway, you have the government establishing a free trade zone at the Centre. Enugu is to the East what Kaduna is to the North. When government wanted to expand the runway to 60m long and 71 m wide there were few houses there and we were promised that they would be demolished and the owners compensated so we can have the improvement but now they have built more houses.”

” Enugu would have to be closed down, that is the honest truth. I’ve told the governor, please let’s face Enugu; expand it and extend the runway, we can push the market two or three kilometers away. We spent US$100 million dollars to do the terminal but who is going to go there? Even domestic airlines we will stop” Sirika said.

On the renovation of the MMIA, Sirika explained that the airport terminal has reached bucking point as it was built to handle 200,000 passengers but is currently doing 8,000,000 passengers and has collapsed.

According to him, Julius Berger has done the estimation and will do everything once the new airport is complete and operations shift there.

Speaking  on same, managing director of the Federal Airports Authority of Nigeria (FAAN), Saleh Dunoma explained that the process may not take as long as they plan to finish the Chinese-Nigeria funded terminal and move some operations there while work takes place.

Nigerianflightdeck is an online news and magazine platform reporting business stories with a bias for aviation and travel. It is borne out of the intention to inform, educate as well as alter perceptions with balanced reportage.
Previous AIMAN makes case for special intervention fund, training to facilitate automation
Next Turkish Airlines set to unveil five lounges at new Istanbul Airport