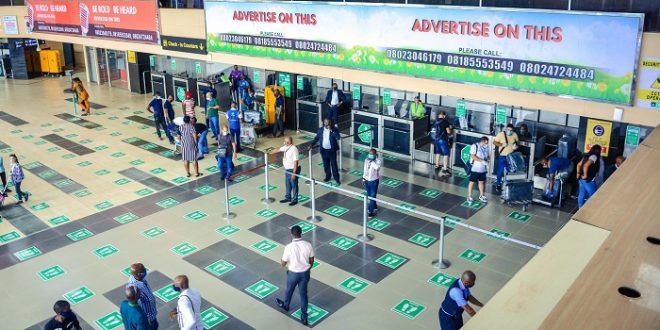 FEDERAL Airports Authority of Nigeria( FAAN) has warned intending travellers with Covid-19 tests that reads positive to desist from coming to board International flights.

The Airport Manager, Murtala Mohammed International Airport (MMIA), Lagos, Mrs. Victoria shin-Aba who made this known said this was a major challenge for them and the Port Health Services as such passengers are educated on the implications of the test results and coming to the airport before they are turned back.

Mrs. Shin-Aba who also doubles as the Regional Manager, South West Airports told reporters that it was sad that, despite warnings that persons tested positive for Covid-19 should isolate, stay indoors for their treatment are seen roaming around in public places and interacting with others.

Shin-Aba disclosed that, they were always in contact with the Port Health Services and had held meetings regarding the matter.

“People with positive COVID test still come to the Airport to board, I don’t know for whatever reason; They know with this they can’t travel but they still bring it but definitely they are not allowed to travel”.

The MMIA Manager stressed that, on a daily basis, FAAN personnel ensures compliance of passengers to the Covid protocols enforcing the use of facemask, sanitizers were in place for use by passengers, adding that with the Omicron variant the spread should be stopped by all means.

“We have to ensure that both passengers and staff obey and comply with protocols”.

On other facilities at the airport, Shin-Aba, noted that, the era of power outage was now a thing of the past as heavy duty generators have been purchased and installed including Universal Power Systems, UPS to sustain power before the generators are switched on.

In addition, She revealed that recently scanning machines were installed on both sides of the screening points at both the arrival and departure.

She expressed delight that passengers traffic had increased tremendously since last week and that, the current facilities at the terminal were being overstretched as a result of long usage and expressed the hope that it would soon be over when the new terminal was inaugurated.

“The terminal was built for the capacity of “two million passengers but as we talk, we do have ten million passengers, definitely it is well over stretched and we still do our best for passengers comfort but the challenge is the cooling system but we are still working on them”.

As regards vehicular movements, she said, the new system of parking had greatly helped decongest the environment of illegal parking and now the terminal had more capacity to accommodate people and vehicles at the front of the terminal.

Nigerianflightdeck is an online news and magazine platform reporting business stories with a bias for aviation and travel. It is borne out of the intention to inform, educate as well as alter perceptions with balanced reportage.
Previous N4.7bn AHC Debt: NCAA shuts down Glo telecommunications mast in Abuja
Next Arik Air pilots call off strike, resume duties