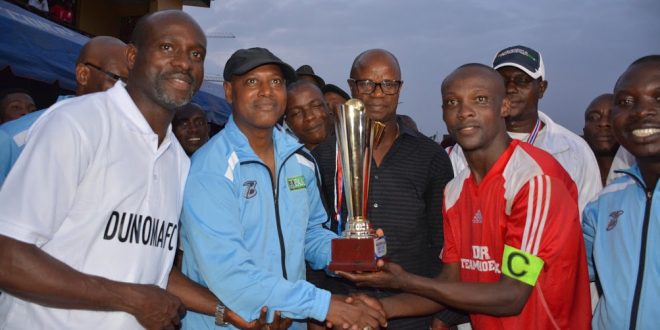 TWO early goals in quick succession in the first half and a late consolatory goal in the second half rounded off the three goal thriller final of the Federal Airports Authority of Nigeria (FAAN) Inter-Directorate Unity Cup Final clinched by the Directorate of Human Resources (DHR) yesterday.

The final between former defending champions of the tournament Dunoma FC and the DHR saw the new champions taking home a whooping N1.2 million cash prize to the delight of cheering fans at the Murtala Muhammed Airport School.

The DHR scored its brace through Jimmy Joel with the DHR controlling the whole of the first half and after a substitution in the second half, Dunoma FC picked up the tempo and scored the consolation goal through substitute and jersey number 9. Cyril Ezeama.

Speaking before the match, the Representative of the Managing Director, Saleh Dunoma; Director of Commercial and Business Development(DCBD), Alhaji Sadiku Rafindadi declared that as the name implied the Unity Cup is meant to bring FAAN as a family together through sports and help project healthy exercising in the agency as well as help to encourage FAAN workers in their sporting endeavours and put in place a team the airport authority can call its own.

Rafindadi also said that football was the obvious choice because the nation as a whole was passionate about the game but stated that FAAN also has plans to put together a basketball team.

He said,”on the standard of the competition, all the players are really ready and we are ready for them to start giving their all the purpose of the game is to bring unity in FAAN and it is doing so.We are trying to form a team that will represent not only FAAN but probably Nigeria in general and that is our purpose of playing this game, it’s a family game, it’s a unity game and its a game that everyone will enjoy.”

Also speaking on the competition, ex Super Eagles Midfielder Mutiu Adepoju dubbed ‘The HeadMaster’ commended FAAN for its contribution to the development of the game stating that the competition is an avenue to scout talents and support them to greatness.

According to him, the level of the competition was high and showcased a lot of raw talents that could be harnessed and brought to the fore to represent the nation.

After the match, awards were giving to outstanding players by the Representative of the managing director and the Guest of honour, ex-Nigerian international, Mutiu Adepoju as well as General Manager corporate Communication, Mrs Henrietta Yakubu and medals were handed to Muhammed Abdullahi who was the Most Valuable Player(MVP), Sunday Elijah of DHR who won Best goalkeeper while the Directorate of Commercial and Business Development won the Fairplay team of the tournament.

Nigerianflightdeck is an online news and magazine platform reporting business stories with a bias for aviation and travel. It is borne out of the intention to inform, educate as well as alter perceptions with balanced reportage.
Previous Nigeria, three others complete Action Plan on Co2
Next AIB invited by São Tomé government to investigate crash