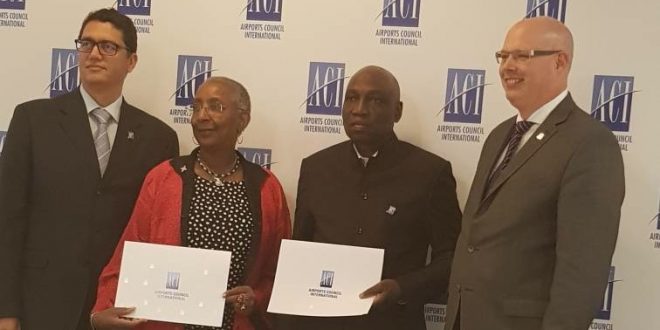 Share
FEDERAL Airports Authority of Nigeria (FAAN) achieved another milestone as the FAAN Training School has become an accredited Training Centre for the Airports Council International (ACI) to aid capacity building and expertise development through access to ACI’s training and review programmes.
This is just as the President of the Airport Council International-Africa (ACI-Africa), Engineer Saleh Dunoma has said that despite growing air traffic demands in 2017 across Africa, the continent still faces challenges that deter it reaching its full potential.

Dunoma made this known in his welcome speech at the 27th ACI Africa / World Annual General Assembly Conference & Exhibition in Port Louis, Mauritius stated that collaboration is the true key to launch the continent to reach its peak.

In his address which encompassed this year’s theme: ‘Bold leadership in a time of change’ the ACI president stated,”We all heard the good news: air traffic demand in the region for 2017 is looking up. A young population, growing labour force, accelerating adoption of new technology and urbanization are all factors that favour future economic growth, and subsequently aviation development, across Africa.”
“However, we are also aware that Africa is a region that faces many challenges including political strife, security and safety concerns, lack of volume, protectionism, currency complications and sluggish growth in income levels in some key markets.”
“Change is no stranger to the region’s outlook and state of the industry, and for this reason there could be no better place to explore this year’s theme of “Bold leadership in a time of change.”
Dunoma who is also the managing director of FAAN highlighted some ACI initiatives that will aid the region’s airport tackle the challenges that were mentioned.
He said, “You will hear of the progress that the Airport Excellence (APEX) programme has brought to the Region—helping many African airport improve the application of ICAO standards and recommendation practices, and international best practices. Out of the 14 APEX reviews that are scheduled for 2017, half of those were or will be in Africa.”
“And, since the beginning of our partnership with the European Aviation Safety Agency (EASA), the number of Safety reviews in Africa continues to grow. The Safety Assessors Training programme, an initiative that helps build expertise in the region, successfully achieved phase one, where 20 new assessors are now part of the APEX pool of experts.”
“In fact the first all African review team conducted an assessment in Bangui this July and we should expect many more to come.”
He added,”And, you will learn of ACI Africa’s new development programme for the region’s airports. The new initiative is designed to help and assist member airports to improve and respond to different challenges, including those posed by security operations, and achieve professional excellence in the application of international standards and best practices.”
Meanwhile, at the signing ceremony for the accreditation of FAAN Training School also held at the 27th ACI Africa / World Annual General Assembly Conference & Exhibition in Port Louis, Mauritius where  it was stated that the FAAN training school will now be used as a facility for the ACI to conduct their trainings to groom aviation personnel.

Nigerianflightdeck is an online news and magazine platform reporting business stories with a bias for aviation and travel. It is borne out of the intention to inform, educate as well as alter perceptions with balanced reportage.
Previous Turkish Airlines announces increase in load factor with 81.5% in September
Next Delta introduces auto check-in for Fly Delta app users