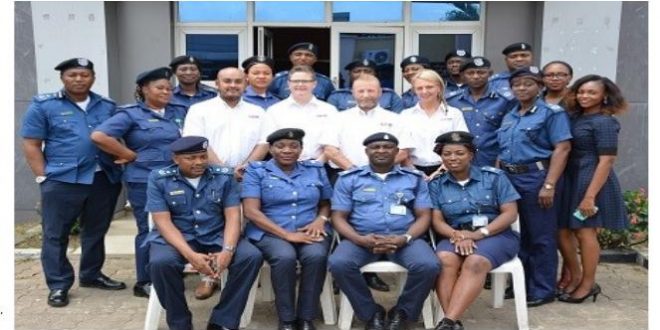 FEDERAL Airports Authority of Nigeria (FAAN) yesterday graduated 300 officers in the Aviation Security (AVSEC) and Aerodrome Rescue and Firefighting Services (ARFFS) Personnel from the class of September 2017 AVSEC and ARFFS cadets made up of 185 AVSEC, 115 ARFFS cadets.
The personnel were ushered into the Authority’s fold, following a passing out parade held at the Murtala Mohammed Airport (MMA) Staff School in Ikeja, Lagos for the new graduates which comprised male and female officers.
Speaking at the event, The Managing Director/ CEO FAAN, Engr. Saleh Dunoma said he was pleased reviewing the passing out parade of the class of September 2017 made up of 185 AVSEC, 115 ARFFS cadets, pointing out that the event further demonstrates management’s continuous commitment to human capacity development in order to meet the highest standards of professionalism and best industry practices.

Engr. Dunoma who was represented by the Director of Engineering Services of FAAN, Engr. Salisu Nurudeen Daura commended the parade instructors and trainees for the impressive performance, professional carriage and excellent “drill” exhibited.

Admonishing the new cadets drawn from AVSEC STP 1-2-3 Class of 2017 and Fire Fighters Basic Class of 2017 to be committed to their jobs, Salisu pointed out that the career path for AVSEC and ARFFS officers is challenging but rewarding at the same time.

Salisu said “In the course of its pursuit, you have a great responsibility to live up to the vision of the FAAN which is to be one of the best airport groups in the world. You should be vigilant and ensure that you do not become the weak link in this value chain. While acknowledging the inherent challenges in your operations, you must guard against temptation, and compromises. You should always put service first before any other consideration as this organization places integrity above all other things”.

“At this point, I would like to acknowledge the unwavering support of the Honourable Minister of Aviation, Senator Hadi Sirika, whose singular passion is the development of the Nigerian Aviation industry. The devotion and sacrifice of our staff, particularly the FAAN Training Centre, AVSEC and ARFFS Instructors, have made this day a reality. Your families’ contributions and support cannot be overemphasized. We sincerely appreciate you all”, Salisu said.

Speaking further, the Director of Engineering Services added “Today’s occasion is an indelible mark in your career as officers of the security, ARFFS. As you proceed to your respective Service Units, I enjoin you to remember all you have learnt and make a personal commitment to excel in your chosen career”

The Director also congratulated all award winners, including the parade commander and all the champion guards for their excellent performance in the passing out parade.

The event climaxed with presentation of awards of excellence to those who distinguished themselves in the programme. The awards were in three different categories, for Aviation Security officers, Fire Officers and Parade Commanders.

While Engr Salisu did the inspection of guards, there were also skill demonstrations by fire fighters and AVSEC personnel at the parade ground.

Nigerianflightdeck is an online news and magazine platform reporting business stories with a bias for aviation and travel. It is borne out of the intention to inform, educate as well as alter perceptions with balanced reportage.
Previous Mainstream Aviation relocates to give room for expansion at Kotoka Int’l
Next NAMA commences Lagos Area Control centre sectorization