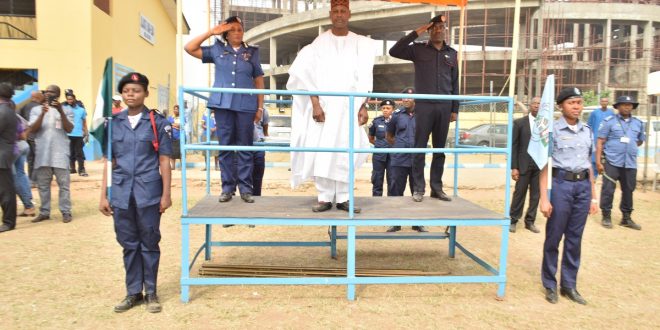 FAAN charges 216 AVSEC, ARFFS officers; enjoins them to be committed

NO fewer than 216 cadets of the Aviation Security (AVSEC) and Aerodrome Rescue and Fire Fighting Services (ARFFS) have joined the fold of the Federal Airports Authority of Nigerian (FAAN) to provide security and safety at the nation’s airports after being graduated last Friday.

The cadets comprising 107 Aviation Security (AVSEC) and 109 Aerodrome Rescue and Fire Fighting Services (ARFFS),  were further urged to be committed in services and to dedicate themselves to the service of in the aviation industry.

Speaking at the pass out parade held at the Murtala Muhammed Airport  Staff School in Lagos Airport, Ikeja over the weekend, the Managing Director of FAAN, Engr Saleh Dunoma said that the event further demonstrates management’s commitment to human capacity development in order to meet the highest standards of professionalism and best industry practices.

Engr Dunoma who was represented by FAAN Director of Commercial and Business Development (DFA), Mr. Sadiku Abdulkadir Rafindadi commended the parade instructors and trainees for the impressive performance, professional carriage and excellent drill, stressing that the painstaking rehearsals and hard work have obviously paid off.

The FAAN boss said “this career path is challenging and rewarding. in the course of its pursuit, you have a great responsibility to live up to the vision of the Federal Airports Authority of Nigeria which is to be amongst the best airport groups in the world”.

“You should be vigilant and ensure that you do not become the weak link in this value chain. While acknowledging the inherent challenges in your operations, you must guard against temptation, and compromises. You should always put service first before any other consideration, as this organization places integrity above all other things”, he said.

The FAAN boss also used the occasion to reaffirm FAAN’s commitment to human capacity development, which has seen demonstrated by the passing out officers, just as he urged them to continue to give their best to the organization.

While appreciating the efforts and unwavering support of the Honourable Minister of State Aviation, Senator Hadi Sirika, Dunoma  equally commended the devotion and sacrifices of the Director of Human resources, training center, AVSEC and ARFFS instructors which have made the day successful.

Meanwhile,  Director of Human Resources and Administration, Hajia Salamatu Umar-Eluwa said the 216 commissioned officers have gone through three months  rigorous training at FAAN training center and that they are part of the online recruitment exercise that took place in 2015.

According to Hajia Umar-Eluwa, the first batch was trained between July and October last year and have since been integrated into the system.

“You have been recruited to serve in the para-miltary arms of this organization where total discipline, professional conduct, unalloyed loyalty and special vigilance are required. I believe that the quality of training you have received has adequately prepared you for these. Our expectations of you are very high and I believe you have all it takes to exceed them”

“I commend the instructors and coordinators of the training programme for their commitment to management’s vision. I also applaud the support my team and I received from the Managing Director in the course of implementing this training”,  Hajia Umar-Eluwa said.

High point of the event marked the excellent military parade by the commissioned officers. There was award presentation to distinguished officers while the band, fire fighting team , medical team and martial artists openly demonstrated their emergency management process to the public.

Nigerianflightdeck is an online news and magazine platform reporting business stories with a bias for aviation and travel. It is borne out of the intention to inform, educate as well as alter perceptions with balanced reportage.
Previous Air Peace launches Accra route, flights to deepen Nigeria, Ghana relations
Next Jet A1 price increases again to N265 per litre, threatens Nigerian airlines’ existence