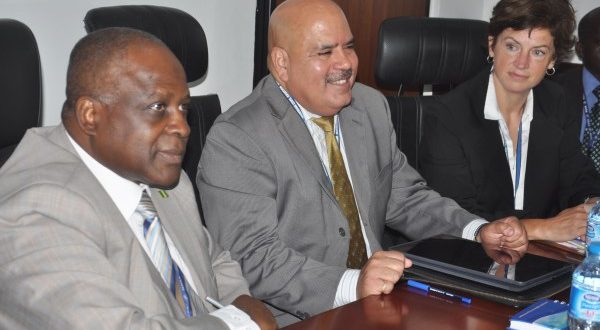 NIGERIAN Civil Aviation Authority (NCAA) has declared that domestic airline, First Nation Airways which was fined N33.5million for violating safety procedures have been downgraded from scheduled operations to a non scheduled operator after operating months with one aircraft.

Director General of the NCAA, Captain Muhtar Usman made this known while briefing Aviation Correspondents on the commencement of the FAA re-assessment of the Nigerian aviation industry to know its level of compliance with international best practices.

According to the DG, the Regulator is working with the airline (FNA) to ensure the payment of the N33.5 million sanctions imposed on it for violating safety procedures in the industry.

Usman explained that the airline had downscale its operations from schedule operator to non-schedule, saying that the status would remain so until it improved its aircraft fleet to at least two and would have to meet the requirements for schedule services.

On the total N33.5 million sanctions imposed on the airline some few months ago for safety negligence, Usman noted that the authority would work with the airline to ensure the penalty was paid.

He, however, said that the essence of sanctioning any operator or organisation was not punitive, but to serve as a corrective measure to prevent recurrence.

He said: “Yes, they use one aircraft and they were on schedule services, but the present status now is that the certificate of the air worthiness of the status has been changed to non-schedule service, which is charter service. So, they are no longer into schedule service until they are able to meet the requirement for scheduled service.

“I will still confirm to you that whatever sanction we impose on any operator it’s in-line with Civil Regulation and it’s not punitive, but corrective. FirstNation was sanctioned, they appealed, the appeal, which was upheld. So, we are still working with them to pay the sanction. We don’t want to cripple any operations. If it is safety related, we will not waste time, but the payment is being worked out now.”

He posited that NCAA has done a lot to see that sanctions are enforced when there are breaches in line with the civil aviation regulations.

On the visit of the FAA team, Usman expressed optimism that the country would once again scale the hurdle, stressing that the regulatory agency was prepared to retain the Category One Status it attained in 2010.

He said, “We got FAA Category 1 in 2010,retained it in 2014.We hope that with the efforts we have put in ,we would be able to retain it this time around.”

The NCAA boss added that during the audit , the FAA team will visit one of the airlines at the instance of audit team.

He explained that the FAA team would focus its audit on Personnel Licensing, International Operations and Airworthiness, which he assured that the agency was fully prepared for.

He stressed that the FAA team would be in the country for the next five days after which they would make their observations known through a report that would be sent to the authority after the exercise.

He said: “NCAA has done a lot in the areas that we are expected to cover and not only for this audit, in our statutory responsibilities; safety, aviation security and also regulations. We have the new civil aviation bill, which is on its way to the National Assembly. The bill is to enhance the current Act of 2006 and it’s supposed to be in line with the new annexes of the International Civil Aviation Organisation (ICAO) Convention. We also amended our regulation, which is 2015 Civil Aviation Regulation.

“Re-organisation has also been going on to make sure the organisation continues to discharge its responsibilities as it should be, which is to be in line with ICAO. We want to continue to attract and retain qualified personnel in the industry in sufficient numbers to make sure we carry out the safety as required by ICAO.

“In the area of enforcement and compliance, we have done a lot. We make sure that our regulations, which are mainly safety, are enforced. Our sanctions are not supposed to be punitive, but corrective. We have been sanctioning where we need to sanction in order to correct and instil safety in the system and even security. We thank God in the last two years we never had any major accident. There is zero tolerance in accident at NCAA.”

Nigerianflightdeck is an online news and magazine platform reporting business stories with a bias for aviation and travel. It is borne out of the intention to inform, educate as well as alter perceptions with balanced reportage.
Previous Delta to launch nonstop service from Lagos to New York in 2018
Next FirstNation says airworthiness certificate intact, confirms downgrade to charter operations