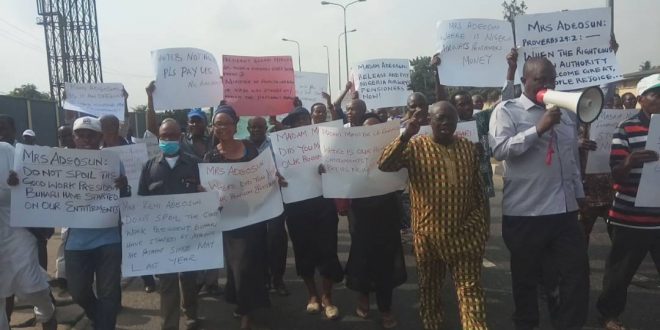 EX-WORKERS of the now defunct national carrier, Nigeria Airways this morning staged a massive protest, decrying the demise of their members while they wait seemingly endlessly for the N45bn pension payment approved for them last year by President Muhammadu Buhari.

The former workers flaunting placards like: ‘Mrs Adeosun do not spoil the good work President Buhari has started on our entitlements’, Mrs. Adeosun where did you keep our Pendion Money’, Madam MOF did you misappropriate our money?’ And chanting unionists slogans blocked the road linking the International wing with the domestic terminals of MMA causing traffic gridlock on the ever busy road.

The protesters were demanding explanation from the Minister of Finance,  Kemi Adeosun on why their pension approved since May last year has not been paid.
The protest kicked off from the Skypower Catering Service with hundreds of members participating. They were earlier addressed by their leaders including the Chairman of Nigeria Airways’ branch of the Nigeria Union of Pensioners (NUP), Comrade Sam Ezene and Engr. Lukman Animasahun.
Nzene said the protest would move to Abuja after Wednesday if nothing was heard from the government on the status of their payment.
“The Minister (of Finance, Kemi Adeosun) keeps insisting that National Assembly has to approve and we went to the National Assembly but they said there is nothing on Nigeria Airways at the National Assembly. That is what we have been dragging since September,” he said.
Other placards read, “President Buhari, save us from Kemi Adeosun now”; ” Mrs Adeosun, your action and inactions are man’s inhumanity to man”; “Madam Minister of finance, where is our pension and entitlements, pay us now”; among others.

Nigerianflightdeck is an online news and magazine platform reporting business stories with a bias for aviation and travel. It is borne out of the intention to inform, educate as well as alter perceptions with balanced reportage.
Previous Emirates says employees’ importance led to retaining Abuja staff after ops suspension in 2016
Next Aircraft doors cannot fall off without conscious efforts to open them,’ Dana enlightens media