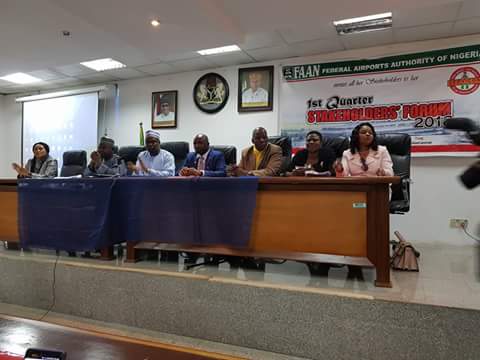 THE Managing Director of the Federal Airports Authority of Nigeria (FAAN) Engr Saleh Dunoma has stressed the need for  team work in order to improve on services rendered by the agency to the public.

According to the FAAN boss, working together as a team will ensure improved service delivery in any organization stressing that every worker has a role to play in the system.

“Service delivery is very key in systems growth, everybody must be involved in teamwork. Everyone has a role to play to ensure effective service”

Engr Dunoma urged workers of the agency to remain committed in the discharge of their duties to improve on the state of airports across the country.

He explained that the essence of the Forum was to evaluate services rendered by FAAN in the previous year with a view to improving on areas of shortfalls to achieve excellent service.

In her goodwill message, the national coordinator Servicom office in the presidency, Mrs Nnenna Akajimeli said the stakeholders forum was aimed at re-positioning the service delivery process of FAAN towards effectiveness and optimal efficiency to serve its customers and achieve its mandate.

According to her, government agencies need to have a clear sense of where they were and where there were going by carrying staff  along with them through engagement and meaningful dialogue with stakeholders.

Akajimeli noted that service delivery in FAAN cannot be achieved in isolation from other fundamentals strategies and activities adding that in order to get it right, there must be constant consultations and discussions among stakeholders to share information and experiences.

She urged them to continue to provide useful inputs to FAAN in order to consolidate on its service delivery efforts to enable it compete favorably in the  aviation industry globally in terms of efficiency and delightful service delivery to customers.
The event was well attended by stakeholders, some directors of FAAN, airline representatives, security agents among others

Nigerianflightdeck is an online news and magazine platform reporting business stories with a bias for aviation and travel. It is borne out of the intention to inform, educate as well as alter perceptions with balanced reportage.
Previous Reports of our operations in jeopardy are erroneous- Med-view Airline
Next Dana Air is official carrier of Wives of Africa Presidents Summit