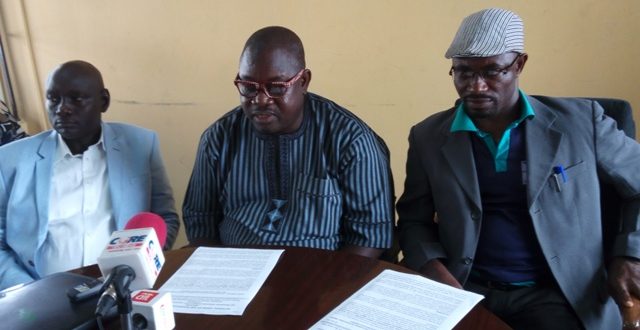 THREE unions have given Minister of State Aviation, Senator Hadi Sirika, 15 days to disband its discredited Transaction Advisors or risk an industrial action of gargantuan magnitude.

In a joint press conference earlier today stated that it was intimating Nigerians on the most provocative and confrontational decision being taken against the interest of the Nigerian people, Nigerian aviation workers without any reservation but unbridled arrogance and nonchalant attitude from those appointed to serve the Nigerian people.

According to General Secretary of NUATE, Comrade Olayinka Abioye who spoke on behalf of the unions said the experience from concession has been bitter especially with the Murtala Muhammed Airport 2 (MMA2) owned and operated by the Bicourtney Aviation Services Limited.

Abioye said,”As these magnitudes of debts outstanding against Bicourtney are yet to be settled in favour of FAAN, how then can we guarantee that the Federal Government of Nigeria, through our Ministry will not unleash another monster on FAAN in the name of concession? Until matters such as this are resolved, aviation Unions shall not rest on their oars and allow these shenanigans to continue.”

The unions questioned the rationale behind a decision to concession an organisation that can be self-sustaining if corporatised and what will befall the organisations workers and pensioners.

He added,”For the avoidance of doubt, we posit for the records and place before the world, nagging issues and questions on our concerns, predicament and expectations of what will become of and or befall FAAN, which has been able to sustain itself, albeit under very terrible conditions inflicted on it by government officials?”

“What lies ahead of FAAN with members of staff totaling six thousand two hundred and eighty-five (6, 285) in twenty-two airports and with their Pensioners totalling four thousand, one hundred and twenty-four (4, 124) and still counting?”

He further drew attention to the fact that ,”Concession litigation against FAAN is about Sixty Four (64), all pending in various courts, arising from fraudulent operations, faulty and irregular agreements, negation/vitiation of agreements, failure to perform according to agreements and so forth. How do we manage and clear all these cases, while the Minister is busy planning the concessions of our airports, albeit without regard to these existing legal issues?”

“Actuarial valuation (liabilities) of the entire staff of FAAN stood at One hundred and twenty billion naira (N120billion) as at 2015; with monthly salaries and pensions stand at almost Two billion naira.”

Comrade Abioye also alleged that the Transaction Advisors shall play around with a whooping N1.5billion, without budgetary provision questioning who funds this scheme

He went on ,”Another worrisome angle to the entire process was that the Contract Agreement and the Terms of Reference were generated without any input from the Committee (PDT), even while the copy of the Terms of Reference was not availed members until they demanded for it, only to discover that it was not comprehensive enough to provide full details of the Scope of Work upon which the Transaction Advisors were to act upon, to the extent that the area(s) of the airports meant for concession were not listed out.”

“Bearing in mind, the concerns being raised across the length and breadth of our great country over the safety and security of the airports, travelers, meeters and greeters and the Nigerian airspace etc, we therefore ask again, which part of the airport part of the airport does the minister want to concession? Is it the runways, landslide, airside, terminals, terminal facilities , commercial or allocation of access gates and runways?”

“In the meantime, we hereby inform you all that virtually all revenue generation catchment points have been given out to several individuals on concession, such as car parks, (example is the newly commissioned multi storey car park), fuel dumps, shops, VIP lounges, advertisements etc. What then is remaining for concession?”

Nigerianflightdeck is an online news and magazine platform reporting business stories with a bias for aviation and travel. It is borne out of the intention to inform, educate as well as alter perceptions with balanced reportage.
Previous Ethiopian Academy graduates 262 professionals
Next Med-view Airline expands into francophone Africa: Abidjan, Conakry, Dakar