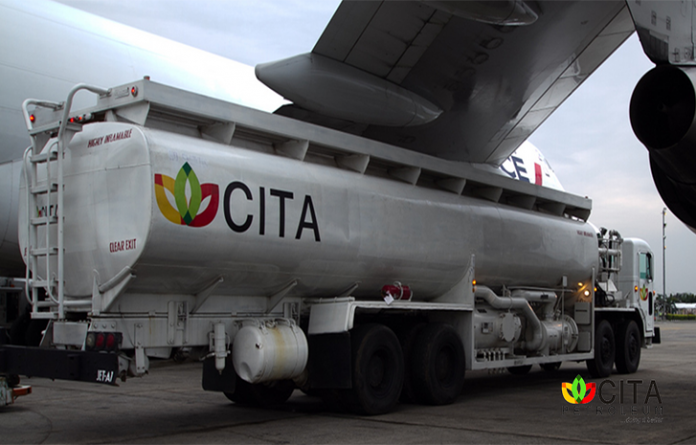 LEADING supplier of aviation fuel in Nigeria, CITA and global energy giants, PUMA have signed an agreement that will ensure security of fuel supply for airlines flying in and out of Nigeria to tank up in Africa’s second largest Jet A1 market.

This is as parties involved in the new alliance stated that the partnership will not only provide supply security but also provide reliable, microbe free jet A1 that will assure safe operations in the market.

Managing Director/Chief Executive of CITA, Dr. Thomas Ogungbangbe, while speaking at the CITA/PUMA Launch in Nigeria with theme: ‘The Journey of Excellence’ stated that the jet fuel aspect of aviation has been riddled with challenges.

He said in his presentation that, “You will all recall that, the jet fuel sector of the economy has grappled with challenges – not devoid from the challenges experienced by the larger economy, a situation that in recent times, led to airlines having to stop-over in other countries for jet fuel supply.”

He continued,”As soon as the downward slide of crude oil in the world market became a continuum, some market indices became confused, foreign exchange became scarce and expensive, so, jet fuel price was going down in the international market but the local market was steadily going up. What a Contago? Hedging became difficult as futures spot price became lower than present selling price.”

He further explained that on the 6th November, 2014, the Central Bank threw Jet fuel out of the RDAS, excluding an essential product that is not produced in Nigeria

“Overall, the trading conditions faced by CITA was not showing any signs of getting easier. If anything, the deterioration in our market accelerated with exit of some foreign airlines, receivership of airlines that held about 70% of the domestic air traffic, reduction of flight frequencies, withdrawal of services from some airfields, re-classification of some licenses and suspension of operating licenses of some domestic operators. I think these illustrate just how difficult conditions became in the country.”

Currently, Nigeria’s status as Africa’s second largest jet A1 market is threatened because emerging regional players like Accra and Lome, siphoning market of the nation because of the unavailability and cost of jet fuel.

However, this new partnership, according to the CITA boss, aims to change the trajectory and re-establish Nigeria on the path to reclaim its place as a hub for the industry and is coming at a very auspicious time, for the airline customers and the country and can only result in a win-win situation for all.

He said, ” we are a global network, as we have grown 20new airports in 2017 and have put tank farms and we are ever growing. We are integrated and trend setting, in that we have spent over $2billion in Africa to build tank farms, equipment and we have invested digitally and in new technology ”

He also held the opinion that Lome and Accra were drawing off of Nigeria and that with this partnership airlines would not need to land in Lagos and fly to Lome or Accra to refuel.

General Manager, Chief operating Officer of CITA, Betiku Olasimbo speaking to the media on airline’s being indebted to oil marketers stated that the business has moved from that over two or three years ago.

“I think the business environment has changed from that now, I’m sure two-three years to this time it has really changed from that supply change situation. The way the jet fuel market is being managed now is a business to business relationship. I am not suppose to say Mr. A is having any exposure to me but what is very important is that there is a change in model. Truly speaking the business has changed from all that, in the presentation I talked about an eras where the supply was controlled by the government and other factors so it means you cannot rule out some of such situations but this time around its business that is being run as an enterprise , an enterprise if you don’t pay for service you don’t get it. It’s an enterprise based supply system, there is a new normal that is not allowing such practice again.”

He attributed airline’s leaving the country to inadequate supply of the product but said the partnership with PUMA aims to correct that.

” Our problem has been supply, if the commodity is not available, if the resources are not available; you may need to go where it is available but today we are reversing the trend that is why we are having this partnership to change the way the business is being managed presently. As airlines are going to neighbouring countries to tank up, we are not gonna allow that again by making sure we solve the issue of supply. We solve that, further indices that make resource managers to make decisions will come into play.”

Nigerianflightdeck is an online news and magazine platform reporting business stories with a bias for aviation and travel. It is borne out of the intention to inform, educate as well as alter perceptions with balanced reportage.
Previous Arik Air resumes Garden City Express from MMA2
Next Emirates says employees’ importance led to retaining Abuja staff after ops suspension in 2016