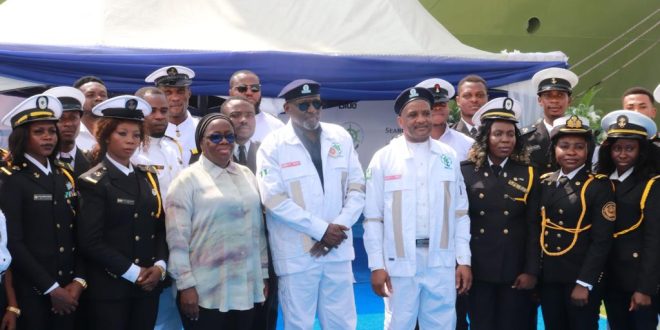 The Nigerian Maritime Administration and Safety Agency (NIMASA) has sent forth 235 Nigerians to India and Greece as batch B of the 435 young Nigerians to be trained as Licenced Deck and Engine Officers including Naval Architects under the Nigerian Seafarers Development Programme, (NSDP).

The Honourable Minister of Transportation Engineer Muazu Jaji Sambo who was the special guest of honor this during the sent-forth ceremony christened NSDP phase 3, TERRA II over the weekend in Lagos, noted that the Federal Government’s decision to continue with the project is based on the role its playing in developing capacity for the Nigerian maritime industry.

In his words “The success of this laudable policy cannot be overemphasised, therefore the Federal Ministry of Transportation will continue to encourage and partner with NIMASA on NSDP and other policies on the development of a sustainable maritime based economy (Blue Economy).

Hence, the Ministry explicitly gave its nod on the expansion of the Programme by another set of 435 new students to be recruited into the NSDP. The flag off of the 3rd phase of NSDP ‘’Christened NSDP-TERRA’’ marks another milestone in the development of manpower in line with the Federal Government’s policy on youth empowerment.

On his part, the Director General of NIMASA, Dr Bashir Jamoh, OFR, noted that the Agency is working with countries who are committed to an understanding for mutual recognition of Certificate of Competency, CoC, in selecting the Institutes to train the beneficiaries.

While acknowledging some teething challenges experienced by the NSDP scholarship scheme in the earlier Phases, the NIMASA DG noted that all grey areas have been addressed to ensure a better deal for both beneficiaries and the Nigerian Government.

In his words “We have taken measures to ensure that all encumbrances experienced in previous phases of the programme are avoided in this new phase.

These include improved recruitment process spread across the six (6) geo-political zones, introduction of a code of conduct for the beneficiaries and most importantly, engaging Maritime Training Institutions (MTIs) that offer shore-based training, shipboard training and the Certificate of Competency licencing to eliminate the long delay in securing sea time training berths that was experienced with the previous set of students.

NIMASA comparatively got the most reasonable cost for the training and in countries with mutual recognition of CoC with Nigeria.

Giving a breakdown of the number of seafarer enrolment, graduates and those already employed, Jamoh said: “It is important to note that from inception to 2020, the programme has enrolled 2,041 students, while 892 are now licensed deck and engine officers including Naval Architects, the rest are in their final stage of the programme.“

It may please the Minister to know that about 486 of the graduates are now gainfully employed and sailing in both coastal and ocean going vessels, adding that the NLNG Ship Management Limited is the leading employer of NSDP​ beneficiaries in the country, with over 40 on their payroll already. Stakeholders at the sendforth ceremony included former DG of NIMASA, Dr. Ade Dosunmu, the President General of the Maritime Workers Union of Nigeria, Comrade Adewale Adeyanju, Secretary General of Abuja MoU, Captain Sunday Umoren. Among them; Engineer Greg Ogbeifun, Alhaji Aminu Umar and Mrs Margaret Orakwusi, who are shipowners, urged the beneficiaries to be good ambassadors of the country, noting that they can be described as privileged Nigerians.​

NIMASA in 2008 initiated the NSDP with the sole mandate of training Nigerian youths to become seafarers and Naval Architects in fulfilling one of its core in the area of Maritime Capacity Building.

The programme was designed to train Nigerian youths up to Degree level in Marine Engineering, Nautical Sciences and Naval Architecture in some of the best Maritime Training Institutions (MTIs) abroad and to position them to compete effectively in the global Maritime Industry.

It was noted that the number of Nigerian seafarers on ocean going vessels as at then had depleted over the years and the urgent need to boost it adequately for effective implementation of the coastal and inland shipping policy of the Government, informed the initiative.

Nigerianflightdeck is an online news and magazine platform reporting business stories with a bias for aviation and travel. It is borne out of the intention to inform, educate as well as alter perceptions with balanced reportage.
Previous Koiki, Eze to launch ‘Air Transportation In Nigeria: The Lingering Expectations,’ tomorrow
Next Operators envisage flight delays, want FAAN to increase airline counters in Abuja