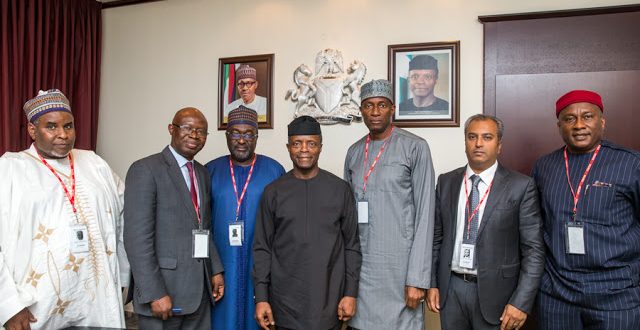 REACTING to the many challenges bedeviling the Nigeria Aviation industry over the last decade Acting President, Prof. Yemi Osinbajo, has promised to address the issues which have hitherto hampered the growth and development of the sector, and hindered it from taking advantage of its natural geographical position as the hub for Africa.

He gave the assurance during a meeting in his office at the Presidential Villa with a delegation of Airline Chief Executives of the Airline Operators of Nigeria (AON).

Prof. Osinbajo used the meeting as a fact-finding exercise to hear firsthand from the airline investors what domestic airlines are going through within the sector and to discover why in spite of the huge potentials as a country blessed with a natural God-given geographic location at the centre of Africa (4.30hrs to most parts of Africa); with most of its airport at approximately sea level, being the 6th largest producer of crude oil (JetA1), a human population of 190 million, and skilled manpower, yet Nigeria is not a hub for aviation activities on the African continent.

Lending voice to the challenges being faced by airline operators, the Chairman of AON, Sir Nogie Meggison said that some of the major issues facing airlines currently include, but are not limited to the following: removal of Value Added Tax (VAT) ( as domestic airlines are the only mode of transport paying VAT – Marine, Road, Rail and even the International airlines don’t pay VAT); harmonization of over 35 Multiple Charges; reviewing 5%TSC to a flat rate (in line with the world practices); Poor Navigational and Landing Aids, high cost and epileptic supply of JetA1, obsolete infrastructure, limiting operations to daylight operation for most airports (Nigerian Airlines  fly an average of only 5 hours as against the average of 10 hours worldwide per airplane); and lack of consultations with airlines before introduction of new charges and policies among others.

The AON Chairman said: “There is an urgent need for a deliberate economic policy that will support the positive growth of aviation and survival of domestic airlines in the country. For instance, following the air crashes of 2005/06, government came up with a policy to ensure air safety. Similarly, the economic policy for the sustenance of the industry needs to be seriously looked into.

“Safety and Economic policy go hand-in-hand. Where there is no financial profit for airlines safety would be compromised. A clear economic policy for the survival of domestic airlines is very critical at this time which has resulted over the years in the death of over 25 airlines in 30years. Safety and Financial Economic Policy must go hand-in-hand; as airline investors are in the business of aviation for the profit and can’t make profit without safety or have a safe airline without profit.

“This is the one of the main reason for the short life span of Nigeria airlines averaging about eight years, Meggison stressed, adding that: “Nigeria has the same four major catalysts in-house that transformed Dubai from a desert into a hub in the Middle East today.”

Having carefully listened to the airline operators, the Acting President acknowledged the difficult situation the airlines face and promised to take a closer look into the various issues raised in order to find ways of addressing them, making it more friendly and promoting the ease of doing business in the airline industry as well as position Nigeria to take advantage of our natural God-given geographical location as the hub in Africa.

In his summation, the AON Chairman noted that: “Aviation as an economic driver therefore, we believe Aviation should be supported as much as possible to thrive in order to reap its many benefits that can easily make aviation the 4th contributor to the economy and a major contributor to the GDP and to create 200,000 new jobs for our ailing youths through its direct and indirect link. Hence, rather than inflict greater burden on Aviation, things should be made easier.”

Nigerianflightdeck is an online news and magazine platform reporting business stories with a bias for aviation and travel. It is borne out of the intention to inform, educate as well as alter perceptions with balanced reportage.
Previous Experts meet at 13th Akwaaba, to discuss 1-year accident free commercial aviation
Next Executive Order: NAMA tasks airspace managers on strict compliance