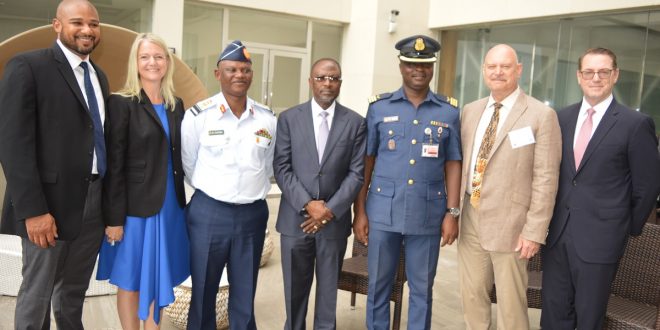 THE Managing Director of the Nigerian Airspace Management Agency (NAMA) Capt. Fola Akinkuotu has advocated an enhanced synergy among Flight Information Regions (FIRs) within the African and Indian Ocean Region (AFI Region) as this would further improve the safety profile of the region.

Akinkuotu who made these remarks while declaring open a five-day Air Traffic System Investigator Workshop hosted by the agency in Lagos noted that NAMA on its part would strive towards building regional bridges in order to keep pace with latest trends, especially in air traffic management in a dynamic aviation industry, adding that “such regional cooperation becomes more compelling with the International Civil Aviation Organization (ICAO) goal of entrenching harmony and seamlessness in every facet of International Civil Aviation.”

While commending ICAO for availing Nigeria the opportunity to host the workshop, Capt Akinkuotu said the benefits of the meeting are enormous as “the workshop would provide participants with knowledge and skills of Air Traffic System (ATS) incident reporting and investigation especially for operational personnel of Air Navigation Service Providers such as NAMA.’’

Speaking further, the NAMA boss said “the quality of air navigation services, particularly air traffic services has been subjected to integrity tests going by the streams of Air Safety Reports received from our airspace users”, stressing however that “the quality of incidents investigation on the other hand should impact positively on the corrective action plan that would minimize future re-occurrence, in a just culture environment, which is the essence of this workshop.”

Also in his remarks, the Director General of the Nigerian Civil Aviation Authority, Capt. Muhtar Usman who was represented by the Director of Aerodrome and Airspace Standards, Mr Mohammed Odunowo stated that global economic and demographic statistics indicate that Africa will experience significant increase in population, expansion in economic activities, as well as increased demand for air transport services in the near future, stressing however that “while the above trend indicates great potentials and opportunities for the African economy as well as aviation sector, it also places immense responsibility on relevant aviation authorities towards the enhancement of Air Traffic Management capacity, efficiency and safety performance.”

The ATS Incident Investigation Workshop provided by the Federal Aviation Administration under the United States Department of transportation (Safe Skies for Africa Programme), in collaboration with  ICAO and the Civil Air Navigation Services Organization (CANSO) is being conducted with the objective of assisting African States to develop capacity in the investigation, analysis, reporting and mitigation of air safety incidents.

Nigerianflightdeck is an online news and magazine platform reporting business stories with a bias for aviation and travel. It is borne out of the intention to inform, educate as well as alter perceptions with balanced reportage.
Previous Updated: Med-view commences hajj airlift with 1,140 today
Next Jollof Rice War: ATM receives Olam sponsorship boost