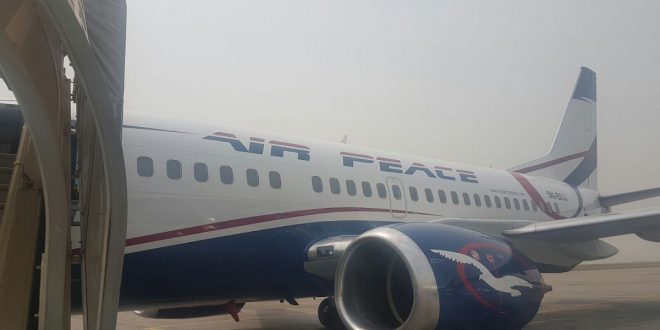 Air Peace’s new B737-500 aircraft at the Murtala Muhammed Airport, Lagos on Tuesday

AIR PEACE has taken  delivery of its twelfth aircraft, a 114-capacity Boeing 737-500, an aircraft that will boost the airline’s capacity drive according to officials of the carrier.

The airline has also stated that it will be opening new offices across the country with the unveiling of its office at Plot C,  Block 12E, Admiralty Way, Lekki Phase 1, Lagos State to help its customers have a smooth travel experience from booking to destination’s arrival.

The aircraft, which landed at the Murtala Muhammed Airport in Lagos at about 2.15pm, threw staff of the airline into an ecstatic mood.

In a statement announcing the arrival of the latest aircraft, the Chief Operating Officer of Air Peace, Mrs. Oluwatoyin Olajide said: “Our customers are our greatest asset. Their support and loyalty have ensured our rapid growth, expansion and choice as Nigeria’s preferred airline. At a time the aviation industry is facing a lot of challenges, we have continued to show strength and maintain very high standards. Our banks and other creditors have also been very supportive because of our integrity.”

The airline, she added, was uncompromising in the maintenance of its aircraft to guarantee the safety of its customers.

“Two of our aircraft are also arriving from C-check. We insisted on the regulatory heavy maintenance in accordance with Boeing requirements. We insist on very high safety standards because we greatly value the lives of our esteemed customers”, Olajide said.

She enthused: “The coming  of our new aircraft will infuse new energy into our expansion drive. Since the last quarter of 2016, we started a massive expansion effort that has firmly positioned us on the Lagos-Benin-Lagos, Abuja-Benin-Abuja and Lagos-Uyo-Lagos routes.

“We will also be covering more local destinations in a matter of days. Already, we are set to commence flight operations into Sokoto. So we are getting more aircraft and doing heavy maintenance of our fleet to sustain the high safety standards we have been known for since we started commercial flight operations.”

Meanwhile, the airline said that the new office aims to bring its services closer to its customers.

It confirmed that its customers can now do their bookings, change their reservations and complete other transactions at the new  office and save themselves the stress of going to the airport to enjoy its services.

Nigerianflightdeck is an online news and magazine platform reporting business stories with a bias for aviation and travel. It is borne out of the intention to inform, educate as well as alter perceptions with balanced reportage.
Previous Airbus reiterates commitment to Africa’s air transport, aerospace sectors
Next Arik Air is still IATA member, global body insists