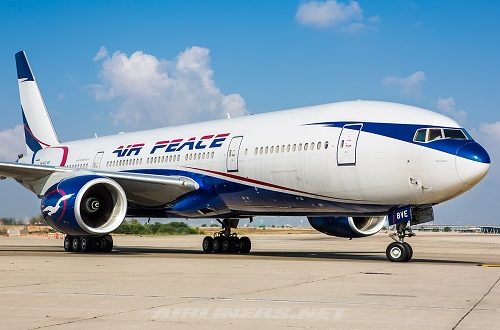 AIR PEACE has added to its list of achievements by embarking on a direct, nonstop 11 hours special chartered flight from the Murtala Muhammed International Airport Lagos to the Island country of Jamaica yesterday December 21, 2020.

The airline, , in a remarkable show of strength,  deployed one of its three Boeing 777 aircraft with registration number 5N-BVE for the historic flight, which departed at 17:00hrs conveying 132 passengers on board and has arrived Montego Bay, Jamaica.

The aircraft will fly into Montego Bay again on December 27, 2020 for the return flight the next day.

Disclosing this to newsmen, the Spokesperson of Air Peace, Stanley Olisa stated that it was a special charter flight and was the airline’s maiden flight to the Island country. He said the flight further accentuates the airline’s capability to operate flights to any destination in the world, adding that “Air Peace has the aircraft and the requisite manpower to do this”.

Nigerianflightdeck is an online news and magazine platform reporting business stories with a bias for aviation and travel. It is borne out of the intention to inform, educate as well as alter perceptions with balanced reportage.
Previous NIS reels out operational statistics for NAIA says 239, 114 passengers passed airport in 2020
Next Heritage Bank launches Recycle Initiative partners LAWMA for greener, cleaner Lagos