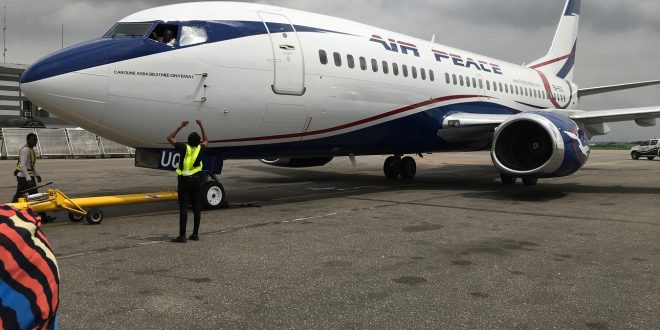 FOLLOWING a widely circulated whatsapp voice recording prophesing impending doom on the roads and in the air allegedly ascribed to the leader of Omega Fire Ministries’ Apostle Suleman; both Air Peace and Omega Fire Ministries have dismissed the trending recorded voice message with the airline describing the message as an attempt to demarket the highly sought after brand.

The message came to limelight a few days ago and started trending on Whatsapp and other social media channels warning members of the public of unpleasant consequences if they patronised some transport companies, including the carrier, on certain days.
A statement issued by Air Peace Corporate Communications Manager, Mr. Chris Iwarah said the voice message was the handiwork of fraudsters disguising as the renowned leader of Omega Fire Ministries to spread fear and demarket the airline.
He confirmed that the airline contacted the church allegedly behind the recorded voice message and the latter dismissed the warning as a product of fraudsters and impostors seeking to deceive unsuspecting members of the public.
“Our attention has been drawn to a recorded voice message currently trending on social media warning members of the public not to patronise some land and air transport companies, including Air Peace. While we would have loved to ignore the message so as not to dignify those behind the voice message, we are compelled by the greater need to assure members of the public and our esteemed guests that it is a fake warning put out in the public space by
criminal elements and people who do not mean well for Nigeria to spread fear and demarket Air Peace.
“The recorded warning has become a recurring but futile and unproductive strategy by these unpatriotic individuals to dissuade members of the flying public from patronising Air Peace.
Indeed, three years ago, the same faceless individuals recorded a similar message and started contacting us through fronts to make available huge amounts to them to avert the claimed looming danger. Of course, we refused to yield to their threats and the dates they mentioned came without a single incident or accident.
“For the avoidance of doubt, we contacted Omega Fire Ministries, alleged to be the source of the trending voice message, and they vehemently denied that the leader of the renowned ministry said any thing of such, let alone recorded any message where Air Peace was mentioned or the warning was issued. The leader of the church has since debunked the warning through his verified Twitter account, @APOSTLESULEMAN.
“We, therefore, wish to reassure our valued guests and members of the general public that Air Peace is absolutely safe and operating strictly in line with global best practices in the aviation industry. The voice warning should be entirely ignored as it is a product of those who have deliberately put themselves at odds with our success with a view to demarketing us and making money out of their criminal act,” Air Peace said.

Nigerianflightdeck is an online news and magazine platform reporting business stories with a bias for aviation and travel. It is borne out of the intention to inform, educate as well as alter perceptions with balanced reportage.
Previous Is the proposed National Carrier a 2019 campaign strategy?
Next FAAN, AIB, others pledge commitment to LAAC’s 22nd Seminar