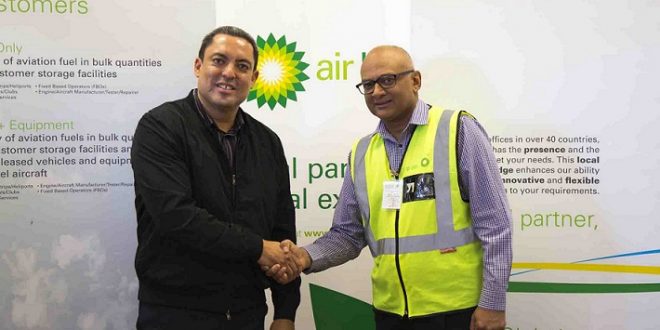 AIR BP, the international aviation fuel products and service supplier, has announced that it has taken over the management and operation of fuel services at Cape Town International Airport (CPT/FACT) in South Africa, effective June 1st.

The operation, which will be managed through the Cape Town Airport Fuelling Services joint venture, will remain under Air BP’s management for a period of three years.

This new contract underlines the company’s reputation as a technical and operations leader and its strength in managing fuelling services at major international airports. The new fuelling services at Cape Town complement Air BP’s existing operations at South Africa’s OR Tambo International Airport in Johannesburg, where it has successfully managed a similar but larger scale operation for the past five years.

Air BP’s operations at Cape Town International will be managed by 45 joint venture employees and comprise the management of the storage and into plane operations.

At a ceremony to announce Air BP’s new role at Cape Town International, Anthony Leon, General Manager, Air BP Southern Africa, commented: “We are very pleased to announce that we are now managing fuelling services at Cape Town International Airport. Air BP is committed to working closely with airport authorities, bringing our industry leading expertise and capabilities in fuel operations management to help them manage risk and run the most efficient and effective operations possible.”

Assistant General Manager Operations, Cape Town International Airport, Mark Maclean said: “We welcome Air BP to our airport operation. Air BP is an experienced team and we have no doubt that they will ensure the continued success of our airport. We look forward to working with Air BP as the new manager of fuel services.”

Cape Town International Airport is the primary airport serving the city of Cape Town and is South Africa’s second busiest airport. There are 24 airlines operating from the airport serving nearly 100 destinations.

Nigerianflightdeck is an online news and magazine platform reporting business stories with a bias for aviation and travel. It is borne out of the intention to inform, educate as well as alter perceptions with balanced reportage.
Previous Air Peace Flight Disruption: Bickering continues as N2m payment unreflected
Next ANAP calls on airlines to pay debts owed, backs Enugu Airport Manager