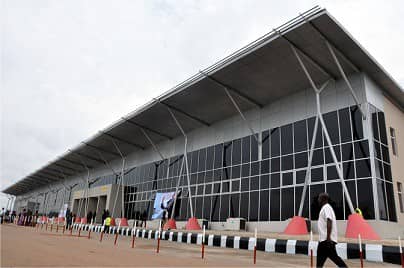 AIIA Enugu partners WHO on Ebola screening and detection

AKANU Ibiam International Airport (AIIA), Enugu, as part of efforts to contain the spread of the deadly Ebola Virus Disease (EVD), has  got the cooperation of the World Health Organisation (WHO) and reinforced its full-blown thermal screening of all passengers coming in and going out of the international airport.

Airport Manager of AIIA, Enugu, Mr. Mgbemena Orjiako who disclosed this to journalists at the weekend added that the WHO which has assisted in giving sensitization talks with all the agencies in the airport.

According to Mgbemena, the talks which are not only centered on ebola, also extend to other communicable diseases that are possibly moveable through the air or by means of air travel.

“You know air travel is the quickest means of moving around from continent to continent. So if there is a contagious disease of such magnitude it can easily move from country to country. So WHO has been here and has equally assisted us in giving talks on how to tackle it and what to watch out for and what to do to prevent the spread”, Mgbemena said.

On what the airport is doing to avoid any spread, the airport manager said that the Port Health Authority (PHA) in collaboration with other agencies at the airport had held an emergency meeting where they carefully planned on how to forestall Ebola Virus Disease (EVD) at the airport.

He said Enugu airport was very serious on controlling the ebola outbreak in DR Congo because international flights are coming into the airport three times a week.

Mgbemena noted that the airport had also created an area where they can take away any passenger that was discovered to have an abnormal temperature.

“That area in the arrival hall where we keep them and also check their temperature discreetly while they are coming in without their knowing. We also have sanitisers in different corners at the airport where people can wash up themselves”, he said.

According to the manager, there was always a joint monitoring of the movement of passengers into the airport every Tuesday, Thursdays and Saturday, adding that they “pay greater attention to those moving into the airport because most of them may be coming from Addis Ababa but they may be transiting from other areas of the world. So we want to be very cautious and we don’t want anything to go wrong”.

Assuring all air passengers passing through Enugu airport of safety, Mgbemena encouraged them to continue to use the airport as the airport is safe and also has all the necessary navigational aids that will aid safe landing and take-off.

He however, lamented that the only thing the airport is still waiting for, is to add at the two ends of the runway approach light for night landing.

“We do not encourage night landing yet because we have not fixed the approach light. So our operational hours for now is just 12 hours from 7:00 am to 7:00 pm. We may be able to do more than that as soon as the issue that surrounds the installation of the approach lights are tidied up.

Nigerianflightdeck is an online news and magazine platform reporting business stories with a bias for aviation and travel. It is borne out of the intention to inform, educate as well as alter perceptions with balanced reportage.
Previous Delta, Los Angeles World Airports prepare for construction of $1.86 billion Delta Sky Way at LAX
Next Ground handling business have gone beyond aggressive price warring-Agboarumi