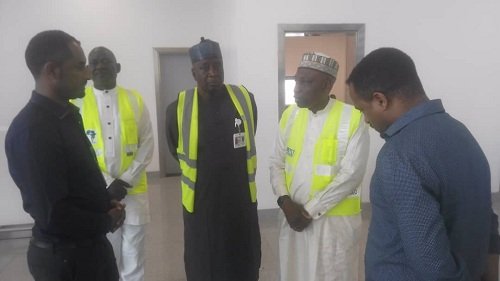 General Manager of Ethiopian Airlines in Nigeria Firihiewot Mekonnen received the first Set of Visitors at the Office in Lagos. At Abuja Airport the MD of the Federal Airport Authority Engineer Saleh Dunomah and Regional Airport Mnager Sani Mamhoud at their office in Abuja

IN the wake of Sunday’s Ethiopian Airlines B-737-800MAX with registration number ET- AVJ which killed all 149 passengers and 8 crew, Ethiopian Airlines has opened a condolence register in their Nigeria offices in Abuja,Lagos, Kano and Enugu.

This is just as the Federal Airports Authority of Nigeria (FAAN), Aviation Round Table (ART) and the Nigeria Civil Aviation Authority (NCAA) have reacted to the unfortunate situation.

ART, in a statement released, said the series of fatal accidents of the B737 Max 8 , the second within 5 months coming on the heels of the crash in Indonesia of the same aircraft type flown by the Lions Air in November 2018, call to question the safety in the design of the Max 8 series by the manufacturer and its certification to fly by the US FAA – the safety regulation authority in the country of manufacturing.

” Curiously, there had been no reported case of such fatal accidents of the aircraft in the US since the aircraft came into operations. ”

“While we condole with the families of those who lost their lives in the unfortunate accidents, we call on Boeing, the US FAA and ICAO to jointly consider these recurring fatal accidents on the B737 Max that have collectively claimed about 350 lives of air travellers within 5 months as a calamity to the global travelling community.”

“These aviation regulatory bodies should therefore demand that the aircraft be temporarily grounded from commercial operations. We noted that some countries including China,indonesia,Ethiopia,Mexico etchave grounded the B737 Max NG fleet pending the determination of the cause of the incessant crashes,” Elder Gabriel Olowo, the ART President said.

Meanwhile, Ethiopian Airlines in Nigeria opened a condolence registers at their all over Nigeria for the Victims of the ET Flight 302 that crashed on the 10th of March 6 minutes after Take off.

The General Manager of Ethiopian Airlines in Nigeria Firihiewot Mekonnen received the first Set of Visitors at the Office in Lagos. At Abuja Airport the MD of the Federal Airport Authority Engineer Saleh Dunomah was received by the Ethiopian Airlines Sales Manager Abuja Tilahun Tadesse.

Mrs Mekonnen thanked Nigerians for Standing with Ethiopia and Ethiopian Airlines in this moment of Grief. ” We thank the Nigerian President and the Good People of Nigeria for the Condolence message from the Government of Nigeria. We have always counted on Nigeria as an African Partner and Brother and this sad Occasion once again proves the Bond. We commiserate with Nigeria over the loss to Humanity of the two Great Nigerians on that Flight . We have since Reached out to the Families involved. Ethiopian Airlines will not abandon its responsibilities to them”

The Nigerian Civil Aviation Authority (NCAA) in its part assured the flying public of their safety, stating that there is no cause for alarm. Presently, the accident aircraft type, Boeing 737 – Max 8 is not in operation in the Country.

However , the Authority, in line with its Safety Oversight mandate enshrined in the Civil Aviation Act 2006, is consciously monitoring the development (s) with a view to take the necessary steps that will enhance the safety of all aircraft in operation within the Nigerian airspace.

The NCAA also condoled with friends and relatives of the ill-fated flight stating,”Our heart is with the Airline and families of the victims of the accident.”

Nigerianflightdeck is an online news and magazine platform reporting business stories with a bias for aviation and travel. It is borne out of the intention to inform, educate as well as alter perceptions with balanced reportage.
Previous Air Peace clarifies on Boeing 737 Max 8 orders, tells public it is yet to take any delivery
Next I survived mutiny on my last flight -Captain Ore