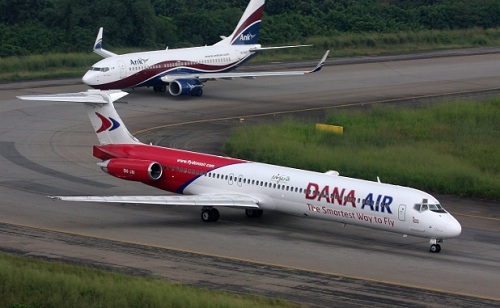 The airlines in say the losses came not only financially to them but as trauma to the passengers some of whose engagements where they were headed to were equally important.

In terms of reschedules, perishable catering ordered that was wasted, and additional cost to airlines to operate out of the General Aviation Terminal (GAT) and other cost, the airlines say it was a bad day and one of them hopes this trend is no longer ignored as it is a major reason airlines in the country find it difficult.

Late yesterday, ATSSSAN called off its picketing of BASL which lasted from 2:30am November 1 till evening but the damage had already been done tenfold.

According to a message to NigerianFLIGHTDECK tagged: Notice of Cessation of Strike, the union said BASL have agreed to recall the laid off members which led to the picketing.

The message read, “The strike that was embarked upon today against the Bi-Courtney Aviation Services Limited has been called off pursuant the acceptance by the company to recall the laid off members of our union and an undertaking to pay their salaries.”

“The agreement was reached at a meeting empaneled by the Ministry of Labour & Employment; NCAA; FAAN; NAMA and airport security agencies. Your unquantified solidarity is genuinely appreciated.”

However, the disruption the union’s action caused yesterday was equally as unquantifiable as the solidarity they showed as airlines have continued to frown on how their (union’s) action left them the raw deal financially.

An airline operator who put some of the impact of the Unions action in perspective lamented that:”For starters, my airline had 31 flights scheduled for today, 98% of them either originating, terminating or linked to an originating flight from Lagos. This meant that we disrupted the programs of approximately 1,900 paid up passengers. Only God knows how to fully quantify this in not just economic, but also trauma terms.

“For us the airline, a lot of the catering ordered, paid for and delivered for our flights today is now wasted (due to perishability). We were forced to reschedule at least 1,000 already booked and confirmed passengers on other flights from tomorrow, costing us heavily in lost revenue (having to remove seats from sales inventory) and wasted man hours, while placing severe and unnecessary pressure on the system.

“We also had to organize (at considerable additional cost, not to mention huge inconvenience) to operate in and out of GAT today.

“For the service providers- ground handlers, outsourced security, etc, plenty of unnecessary and unexpected loss of revenue. Huge waste of man hours.”All in all, it was a largely unproductive day. Something the industry can hardly afford at this critical time! The sort of very, very, very bad day that I hope we never see again as an industry. More than that, it amounted to another net loss of image for our local industry (which keeps on being chipped away at, both domestically and internationally).

“We cannot and should not just keep on dusting these things off and carrying on as if nothing untoward happened. We need to change direction. We need to find a way to shed our old skin and move forward. “

Nigerianflightdeck is an online news and magazine platform reporting business stories with a bias for aviation and travel. It is borne out of the intention to inform, educate as well as alter perceptions with balanced reportage.
Previous dre aviation expands service offering to private equity
Next NiMet alerts on commencement of dry season in the North