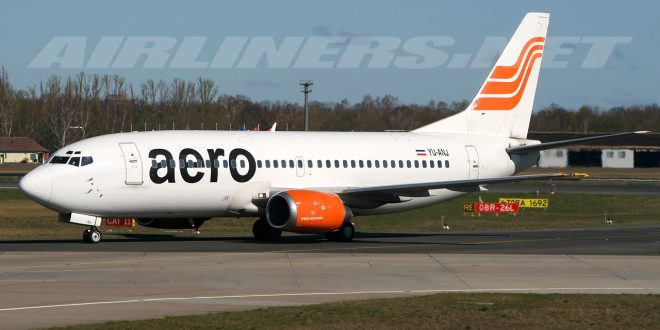 AERO CONTRACTORS Airlines has announced that it would suspend its scheduled services from Thursday September 1, 2016. A statement from the airline management said the development was part of the strategic business realignment to reposition the airline and return it to the part of profitability.

This business decision, which is a result of the current economic situation in the country, has forced some other airlines to suspend operation or out rightly pull out of Nigeria.

In the case of Aero, Chief Executive Officer, Captain Fola Akinkuotu said the airline had faced grave challenges in the past six months which impacted its business and by extension the scheduled services operations. These factors, according to him are both internal and external environmental factors that have made it difficult for the foremost airline to continue its scheduled services.

He said during the period in review, Aero, which was hitherto revered for its safety, timeliness among other virtues witnessed epileptic operations and services to the external publics that are caused by non-alignment of fundamental issue of the business, which in some cases have been frustrating and embarrassing to all parties including staff, customers and indeed all stakeholders.

As part of its resolve to ensure the airline survived unlike most other carriers that experienced short life span in the country, AMCON had appointed Mr. Adeniyi Adegbomire SAN as Receiver Manager in February 6, 2016, with the aim of turning the airline around.

Since AMCON’s intervention in Aero Contractors in 2011, it has provided support for the airline to meet working capital requirements and fleet expansion. These were to ensure the airline remains a going concern providing services to various clients and the general public.

Unfortunately, the operating environment within and outside the airline have hindered any possible progress especially in the last six months when the Naira depreciated against the dollar thus making it impossible for the airline to achieve its operational targets.

With these realities coupled with protracted engagements with all relevant stakeholders, the Management of Aero has strenuously reviewed and assessed options and opportunities on ensuring viability, safety and sustainability of operations during the period with a lot of sacrifices.

“The impact of the external environment has been very harsh on our operational performance, hence management decision to suspend scheduled services operations indefinitely effective September 1, 2016 pending when the external opportunities and a robust sustainable and viable plan is in place for Aero Contractors to recommence its scheduled services.

The implication of the suspension of scheduled services operations extends to all staffs directly and indirectly involved in providing services as they are effectively to proceed on indefinite leave of absence during the period of non-services,” the Chief Executive Officer stated.

He added that “We are aware of the impact this will have on our staff and our highly esteemed customers, hence we have initiated moves to ensure that we are able to return back to operations within the shortest possible time, offering reliable, safe and secure operations, which the airline is known for.”

Nigerianflightdeck is an online news and magazine platform reporting business stories with a bias for aviation and travel. It is borne out of the intention to inform, educate as well as alter perceptions with balanced reportage.
Previous Pilgrims warned against drug trafficking at Medview hajj seminar
Next Okewu’s Secondment: NAAPE raises questions on Abali’s involvement