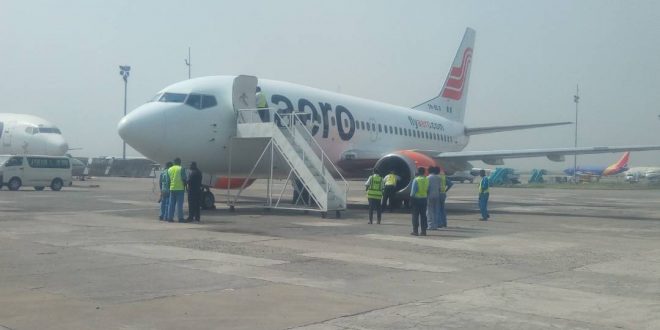 AERO CONTRACTORS today made history as it became the first Organisation to complete a C-Check of an aircraft in the whole West African region after the airline finished the C-Check of its own aircraft at the Aero Contractors hangar in Lagos.

The airline this afternoon also completed a test flight on the 737aircraft which was completed by Captain Gabriel Ayeni with co-pilot Wale Awojebe and C-Check Manager, Engineer Claude and the crew.

An elated Managing Director of Aero, Captain Ado Sanusi who spoke with Nigerianflightdeck.com this evening stated that the aircraft would be rolled out of the hangar next week but was satisfied with the capacity that the organisation has built highlighting plans to build on what has been done and improve tremendously.

” This is the first C-Check ever done in the region on the Boeing 737 Classics, this is very good news and is good for the aviation industry in Nigeria. It shows we have the capacity to conduct the C-Check. We are not going to rest on our oars, we are going to improve on this so we can carry out C-Checks on the Next Generations (NG). We will go further to create capacity to carry out checks on Airbus, this is a stepping stone for the organisation,” Captain Sanusi said.

Aero Contractors was granted approval by the Nigeria Civil Aviation Authority (NCAA) to carry out C-Checks on Boeing 737series along with its maintenance of the Bombardier Turboprop airliner series.

The airline received certification to handle C-checks on Boeing classic series B737-300, B737-400 and B737-500 at the airline’s terminal effective from September 12, 2017 thereby domesticating maintenance that is the major bane to almost all domestic airlines in the country
This is a major feat for Aero, and the first by a flag carrier in Nigeria. It would be recalled that Aero had earlier received an AMO certification from the NCAA in 2011 which allowed the airline to carry out third-party maintenance for other airlines.
There are over four airlines that operate the B737-300, 400 and 500 series in Nigeria, excluding neighbouring West African countries.

Nigerianflightdeck is an online news and magazine platform reporting business stories with a bias for aviation and travel. It is borne out of the intention to inform, educate as well as alter perceptions with balanced reportage.
Previous Med-view apologises to aggrieved passengers, applauds their perseverance
Next Med-view successes indicator ex workers didn’t fail Nigeria Airways