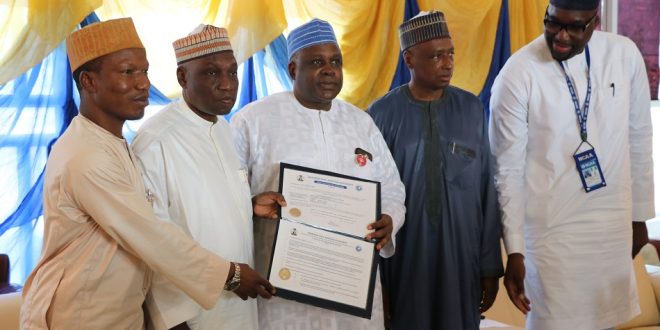 This is just as the regulatory body has revealed that certification of Kano, Port Harcourt and Enugu airports are scheduled for completion in the 1st, 2nd and 3 red quarters of 2018.

Director General of the NCAA, Captain Mukhar Usman who handed the certificate to the managing director of Federal Airports Authority of Nigeria (FAAN), Engineer Saleh Dunoma said it was an epoch-making moment for the country.

He said,” The attainment of this safety milestone is quite significant in view of the fact that less than 25% of international airports in Africa and Indian Ocean are certified.”

” However, we are not resting on our oars, as the certification of Kano, Port Harcourt and Enugu airports are scheduled for completion in the 1st, 2nd and 3 red quarters of 2018 in compliance with the Abuja Ministerial declaration and safety targets of 2012.

Engineer Dunoma in his remark restated FAAN’ s commitment to continue with the present tempo with the other international airports.

” we made a commitment to continue with this tempo soon we will go to Port Harcourt, Kano and Enugu but for today we have achieved a milestone. I want to recognise the DG NCAA because anytime I talk to him, certification is always the main topic so I want to thank the NCAA team for their commitment . Let’s sit down and continue to improve on the safety situation because that is all that it’s all about, safety.”

Airport Manager NAIA, Mahmud Sani who gave his remarks said apart from 1982 when the airport was commissioned, today 10th November, 2017 should be the happiest day of this airport.

“It has been a tug of war but it has come to pass and I thank God for making it possible and I want to assure the world that NAIA will stand the tempo and would not go back.”

Nigerianflightdeck is an online news and magazine platform reporting business stories with a bias for aviation and travel. It is borne out of the intention to inform, educate as well as alter perceptions with balanced reportage.
Previous ICAO President highlights solutions to air travel challenges at 47th IFATSEA
Next Emirates Group record half year improved revenue of US$13.5billion