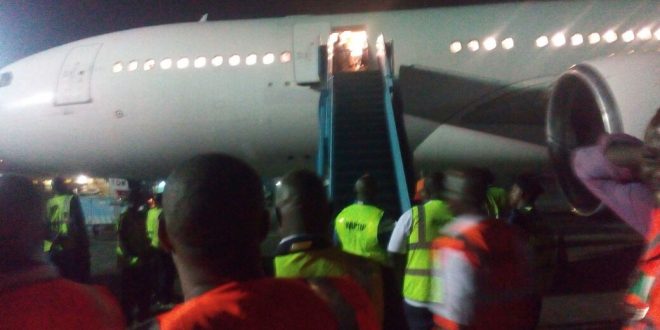 LATE Thursday night it was gathered that 43 Nigerians were deported from countries around Europe including Germany, Belgium and Italy for what is being described as immigration related offences and unruly behaviour.

They were received on arrival by officials of the National Emergency Management Agency (NEMA), the Nigerian Immigration Service (NIS), the police, among others.

According to the Deputy Director, Search and Rescue, NEMA, Dr. Bandele Onimode, the deportees comprised 33 from Italy; seven from Belgium and three from Germany.

Onimode who represented the DG of NEMA, Alhaji Mohammed Sidi said the agency would make sure they are comfortable and see them to their various destinations.

He urged them to stay in the country and develop it.

“They are coming back empty and this is a lesson to them to settle down home and be useful to their country. We will ensure that they are well catered for”.

Nigerianflightdeck is an online news and magazine platform reporting business stories with a bias for aviation and travel. It is borne out of the intention to inform, educate as well as alter perceptions with balanced reportage.
Previous Air Peace expands routes, starts Sokoto operations March 1
Next Mass Sack: FG fires all NCAA Directors, DG unaffected