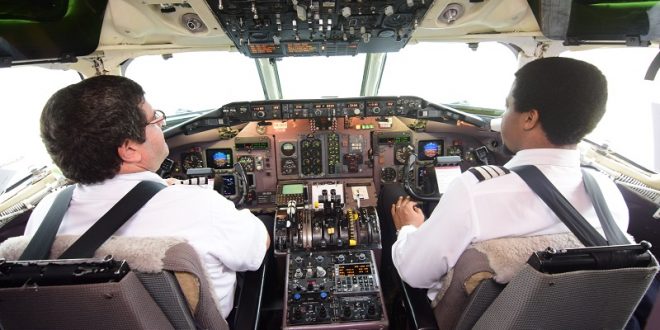 The cockpit of an aircraft

Why passengers should switch off electronic devices during flights

NigerianFlightDeck 15th July 2018 Comfort & Crew, Travel Tips Comments Off on Why passengers should switch off electronic devices during flights 209 Views

Many passengers often refuse to switch off their electronic devices, especially mobile phones while an aircraft is about to take off or land when the crew makes the announcement. In this edition of Travel Tips, ANTHONY OMOH looks at the importance of adhering to these rules.

AFTER cabin crew demonstration of safety procedures, they announce for passengers to switch of all mobile devices completely, not on flight mode, but completely and some passengers usually wonder, why? Others refuse to give a hoot and keep at it.

In truth, this crew directive in travelling by air, although not entirely proven; is far-reaching as far as safety is concerned.

The directive to switch of mobile phones and other electronic devices is played up during take off and landing as you will notice that during those periods cabin crew move around to tell their passengers to turn off their devices as it is suggested that the mobile waves from these devices can create communication interference for pilots.

The electronic device rules are important, according to many pilots, to avoid potentially dangerous noise between signals from these devices and sensitive onboard electronic systems. Whether founded or not, hinderance (noise) is a possibility when communication is concerned.

Take your average radio for example, switch it on and stand close to it while making a call or better yet, call into a live program on radio and the first thing you are told is to turn off the radio set or go far away from it as possible, now the radio station is not in your house and they ask for this caution, it may not be for same reason but the logic is impeccable and same with flying.

Now imagine you are in the same aircraft with your phone and other communication equipment, do the math .

I was on an aircraft to Abuja once when I noticed the cabin crew telling the gentleman to switch off his phone, he was irritable and screamed at the poor lady who was only doing her job and she had to get the attention of other crew members including the First Officer who told the man he would be deplaned before he (the man) grudgingly complied.

Most people don’t care for the rules but once faced with the consequences of their action they tend to plead ignorance, the passenger in question does not know that he is violating the safety of passengers onboard and can be deplaned, arrested and charged to court.

Fact most stubborn passengers fail to grasp is that there is no parking space in the sky and so whatever you do mid-flight goes a long way boost or impede safety and since during taking off and landing, it is important that the pilot has clear communication with the control tower, asking devices to be shut off for a short period is not too much to ask.

This kind of action is not limited to Nigerian passengers alone as a recent United States survey found that four passengers out of 10 owned up that they don’t turn off their devices on flights.

According to regulations, the use of portable electronic devices is not allowed below 3000m (10,000ft), even in “flightmode” which does not allow emission of any signal whatsoever. However above this height some of these electronic devices can brushed from laptops, to music players. On many occasions, I have filed my stories mid-flight; used my midget to transcribe and work on stories but that is the extent.

There are some evidence of malfunction including an International Air Transport Association (IATA) report which identified 75 separate incidents of possible electronic interferences that pilots believe were related to electronic devices between 2003-2009.

So it is not about whether leaving your mobile phone on has caused an aircraft to crash or not but the fact that there is a high possibility it can be a remote cause to a bigger incident, so as an appeal when the crew asks you to put off your electronic devices please do for your safety and the safety of everyone onboard because when the aircraft is at 10,000ft you can use some allowed devices.

Err the side of caution and listen to the crew.

Tags Why passengers should switch off electronic devices during flights

Nigerianflightdeck is an online news and magazine platform reporting business stories with a bias for aviation and travel. It is borne out of the intention to inform, educate as well as alter perceptions with balanced reportage.
Previous AIB, UNILAG partner on material lab usage
Next LAAC Seminar, Awards hold Thursday