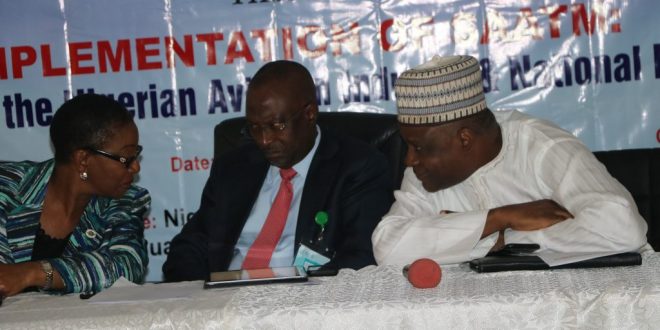 Who is afraid of the Single African Skies?

NigerianFlightDeck 29th January 2018 Analysis Comments Off on Who is afraid of the Single African Skies? 177 Views

DURING the sensitization workshop for the implementation of African Single Skies, Nigerian carriers expressed their discontent with the policy which they say will leave the country on the negative side of the balance leading to massive capital flight, huge loss of jobs and further collapse of the already failing aviation system. As the SAATM launched yesterday in Addis Ababa with the promise of better connectivity by air, the ability to unlock the economic and social benefits that air transport can deliver through mobility of people and goods, the question is why are the airlines in Nigeria calling for a rethink of immediate implementation. ANTHONY OMOH compiles this report

LAST November, Director General of the International Air a transport Association! Alexandre de Juniac, declared about the open skies that: “Opening borders, lowering barriers and implementing the open skies agreement is always favourable to the industry, There will be winners and losers, but it will be favourable because it will boost their traffic.”

With Sunday the 28th launch of the Single African Air Transport Market (SAATM), the question which should have been asked at that point is who will be the winner and who will lose once the SAATM is implemented? So that countries who feel disadvantaged can restrategise in a way to better understand or tap into how to turn this much talked about implementation to their favour.

Just last week before the launch, the Nigeria Civil Aviation Authority called a one day sensitization workshop for an implementation scheduled to take place barely a few days, this caused aviation investors in the country to question how the country got rail-roared into signing off on the implementation of the Single African Air Transport Market (SAATM) where countries were taking their time to develop themselves before jumping headlong into uncharted waters.

The pursuit of full liberalisation of African skies received a major lift in 2015 when 11 African Heads of States at 24th Ordinary Session of the African Union (AU) Assembly made a solemn commitment to the implementation of the Yamoussoukro Decision (YD) towards the establishment of a single African air transport market by 2017.

These Member States have been requested to implement a number of key steps towards ensuring the full implementation of the YD, the initial condition for the establishment of the Single Market.

According to a statement from AFRAA Secretariat in Nairobi, Mr. Berthé lauded the 23 States that are the initial members of the SAATM. “With operationalization of the SAATM, intra-African connectivity will develop and in turn, aviation’s role as an economic driver will grow significantly,” he said.

He urged the States to go a step further to ensure they create an enabling operating environment for airlines so that they may realise maximum potential of the SAATM and take advantage of the benefits that aviation brings. He appealed to the remaining African states to join the 23 to help in the realisation of the far-sighted vision of a Single African Air Transport Market that will help spur the development of African aviation.

“The States that have signed the solemn commitment offer a significant single air transport market space, in terms of traffic volumes and airport infrastructure and airlines within the twenty-three countries account for more than 80% of the intra-African traffic”, Various aviation stakeholders comprising high level delegates from the African Union Member States, trade Associations, the international media, representation of global aircraft manufacturers, civil society and the wider public with be present at the event on 28 January 2018 which marks a major milestone in unlocking the potential of African aviation.

Secretary General of the African Civil Aviation Commission (AFCAC) , Ms. Iyabo Sosina who spoke on the benefits of implementing the SAATM however stated that 23 countries out of the continent’s 54 countries have already signed off on the implementation of the SAATM.

On benefits she stated the the YD will provide African airlines commercial freedom, wider networks, better aircraft utilization and create a larger market share for the continent and improved access to capital as well as more flexible commercial arrangements such as alliances, codeshares, franchises, interlining, mergers and acquisitions among African carriers.
“As we are aware, the better connected a country is by air, the greater its ability to unlock the economic and social benefits that air transport can deliver through mobility of people and goods to the traveling public, air carriers, airports, other allied service providers, the economy of member states and the continent as a whole.”

Ms Sosina explained that protectionism of local market share is not the way forward and that Africa needed to open its airspace within the continent.

However, airlines in the country said Nigeria is simply not ready to handle the level of unfair competition that the full implementation of SAATM will bring upon the country, positing that the implementation at this time will lead to massive capital flight, huge loss of jobs for the youth as well as a further collapse of the already failing Nigerian aviation system.

Airline Operators of Nigeria (AON) in a follow-up statement after the sensitization asked the Federal Government of Nigeria to have a rethink on the immediate implementation of the open skies stating that while it believes open skies is a good idea, called on government work with the local technical expertise in the aviation sector by going back to the drawing board and come out with a clear and deliberate policy on how it should approach.

According to the AON, while the idea may be noble on paper, there is a need for government not to lose sight of the facts and the dangers of the direct impact of the decision on the Nigerian economy and Nigeria as a whole.

AON Chairman, Capt. Nogie Meggison said: “We are concerned that the timing is not right as there are several unresolved issues and challenges being faced by Nigerian aviation that will ultimately undermine the perceived gains of this Treaty that might be an illusion for our beloved country.”

“Some of the problems for Nigeria to take its position and compete favourably in the open skies process include the following: The basic issue of free movement of people and trade is an integral aspect of the declaration that will go a long way to determine the fairness of the SAATM project. Sadly, it is a well-known fact that Nigerians require over 34 visas to travel within Africa alone. This is an issue that first needs to be addressed. Before opening the skies, open the visas. “

The AON further argued that unclear and constantly changing policies that throw out Nigerian airlines’ feasibility studies into red hinders Nigerian airlines from taking full advantage of the open skies.

He stated,”Nigerian airlines are at a disadvantage to other African Airlines that are largely government-owned and heavily subsidized. For instance, South African Airways got on the average about $350m yearly in the past decade; Kenya Airways got about $600m in 2016, while RwandAir has never published its financial results for over a decade. Yet they will be competing against Nigerian airlines with private finance at 28% bank interest rate compared to access to cheap funds provided and guaranteed by the government of most African carriers at a maximum of 2%.”

The AON further argued that charges incurred by Nigerian carriers when they fly to their ‘sister ‘ African countries were ridiculously insane as the charges as confirmed also by AFCAC are not uniform anywhere in the continent.

Captain Megisson said,”The charges around Africa are not uniform across board. Government should ensure all the taxes are uniform before the implementation of the Open skies. For instance, when we fly to some African countries they charge us heavy landing fees in excess of $5000 – $6000. The same countries subsidize their local operators who pay $200 for the same service. But when they fly into Nigeria they pay a mere $500, the same as our local carriers.”

The AON further stated that 57% of the 54 nations in Africa are yet to sign the open skies deal. Only 23 countries have committed themselves to open skies further throwing up the question: why is Nigeria in a hurry to sign the Treaty when we are yet to put our domestic aviation industry in order first and empower our Nigerian carriers to compete effectively?
Also, Nigeria is the only country in Africa with eight (8) entry points while most of the other African countries have only one entry point.”

AON said it considers it as unfair and a complete disconnect that Nigerian airlines who are the fulcrum of the implementation of SAATM in the country were not carried along in the decision process leading up to the signing of a Treaty and Firm Commitment to the process which will ultimately affect the future aviation of Nigeria in many years to come and the
It is sad that airlines were only invited to a Stakeholders forum for a briefing, barely 72hours to the signing of what has already been concluded without seeking the opinion of airlines and aviation entrepreneurs for advice and strategies on how to harness the open skies to the advantage of our beloved country Nigeria as a whole.

The die is now cast however, and all agitations must be set aside for airlines in the country to realign, restrategize and reorganize ways in which they operate within this new framework and make some profit despite the the fact that major carriers in the continent who actually pushed this through plan to saturate the market.

Tags Who is afraid of the Single African Skies?

Nigerianflightdeck is an online news and magazine platform reporting business stories with a bias for aviation and travel. It is borne out of the intention to inform, educate as well as alter perceptions with balanced reportage.
Previous Med-view passengers cause uproar at MMIA as airline cancels flights
Next Security: FAAN to install CCTV, evacuate abandoned aircraft at MMIA