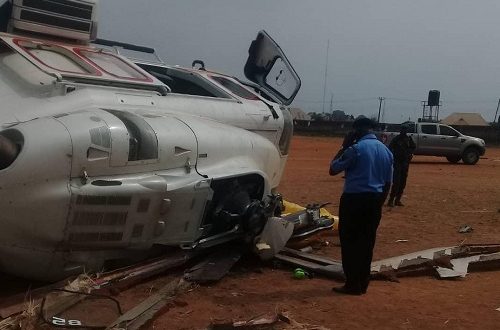 AFTER yesterday’s helicopter crash in Kaaba, Kogi State, involving Vice-President Yemi Osinbajo, management of Caverton Helicopters have said that relevant authorities have been informed of the crash and that a probe has been instituted.

Managing Director/Accountable Officer of Caverton Helicopters, Capt. Josiah Choms, relevant authorities to investigate have been informed and that the airline will support them in any way they can to get to the root of the matter.

Choms, in a statement said there were no injuries to the passengers or crew on-board as they were all quickly and safely evacuated.

He stated, “The relevant authorities have been duly informed and an investigation into the incident has commenced. We will, of course, support the authorities as required”.

“We wish to reassure the public and our various stakeholders of our unwavering commitment to safety in all of our operations”.

Meanwhile, the Accident Investigation Bureau (AIB), our correspondent gathered, has deployed investigators to the site of the crash but are yet to come out with an official statement despite Captain Choms’ attribution of the accident to ‘unusual weather conditions’.

The crashed aircraft, an AgustaWestland AW139 is a 15-seat medium-sized twin-engined helicopter developed and produced principally by Augusta Westland.

Vice-president Yemi Osinbajo and his entourage crash landed in Kabba, Kogi state when he visited the town for his next-level engagements with the people, was undaunted by the accident.
Also in a statement by Senior Special Assistant to the President on Media and Publicity, Laolu Akande yesterday Vice President Yemi Osinbajo, SAN, arrived Kabba, Kogi State after the incident and continuing his engagements in the State, engaging the people on the Next Level plan of the Buhari administration.

Nigerianflightdeck is an online news and magazine platform reporting business stories with a bias for aviation and travel. It is borne out of the intention to inform, educate as well as alter perceptions with balanced reportage.
Previous Nahcoaviance to invest N3.6b to drive equipment procurement in 2019
Next NAMA takes delivery of spares to maintain TRACON’s functionality