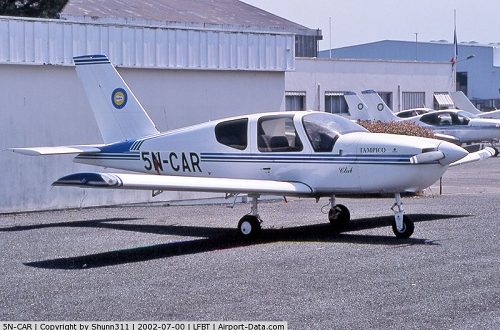 One of NCAT's T9 Tampico aircraft (Disclaimer: This is not the crashed aircraft)

NIGERIAN College of Aviation Technology Zaria,  lost one of its  TB-9 Tampico aircraft after a forced landing by the pilot at about 14:40 on March 1, 2019 due an engine failure.

Fortunately, no lives were lost as both occupants of the aircraft came out unscathed by the incident and have since returned the base.

Nigerianflightdeck learnt that the Tampico (TB9)aircraft with Nationality and Registration marks 5N-CBP was on a test flight being conducted by a Pilot and an Engineer.

The Accident Investigation Bureau (AIB) has been notified, in line with standard practice.

Nigerianflightdeck is an online news and magazine platform reporting business stories with a bias for aviation and travel. It is borne out of the intention to inform, educate as well as alter perceptions with balanced reportage.
Previous UBA Group spreads tentacles further, launches full banking operations in the UK
Next Crashed NCAT aircraft riddled with bullets, burnt by bandits