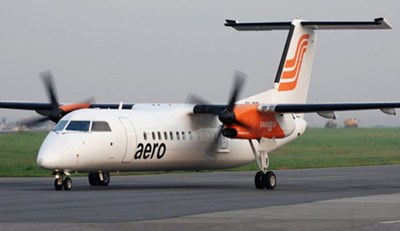 One of Aero Contractor's Dash-8 aircraft

IN the wake of Aero Contractors Airlines announcing that it would suspend its scheduled services from Thursday September 1, 2016, unions in the aviation industry are converging to ensure that their members are sent off without anything to fend for themselves especially as the airline is heavily indebted to staff

Nigerianflightdeck.com has learnt that Aero Contractors currently owes its workers two months salaries and gratuities amounting two years and there are palpitations of hearts of the workers over the uncertainty of their pay as the airline is in a financial mess.

Around the airport today and all over social media both Aero workers and non workers are asking the fate of the staff who are always caught in the wrong end of this kind of situation and the signals are not looking encouraging to say the least.

It is against this backdrop that the National Association of Aircraft Pilots and Engineers (NAAPE). Air Transport Senior Staff Services Association (ATSSSAN) and National Union of Air Transport Employees (NUATE) will be meeting the Aero Management tomorrow to ensure their workers are not booted out without their livelihood.

NUATE scribe, Comrade Olayinka Abioye who spoke to our reporter over the phone described the suspension as a sad commentary for the airline industry, while praying that the airline restructures as it says and does not go the way of others before it.

Abioye was however concerned about the level of indebtedness of the airline to its workers, stating that is the reason the unions will meet the management in tomorrows parley.

Abioye said,” As I speak to you the management of Aero Contractors is owing its workers two months salaries and gratuity of 1-2 years. We were just told that management invited the branch unions and told them that they will be shutting down and all non essentials for now would have to go home.”

“ We feel sorry for Aero but we have to make sure our people do not suffer for this, As we speak there are over 400 workers that have been declared redundant and management does not have a dime to pay how much less the generality of workers that they are asking to go home.”

“During the peak of this crisis, we advised the management to shed some weight especially from services they solicit from outside (Contractors) but even that was not enough.”

“An airline that used to have 14 aircraft now only has one and that one is unreliable. It is a disaster if Aero goes under but the truth is when you have to take this kind of decision, it means it has reached breaking point. Nobody can force them to undo this decision.”

“It is rumored that there is an investor waiting  somewhere in the wings but we want to ensure we have negotiated the staff remuneration. If true and the investor comes in who will pay the over 1,000 staff who will be responsible for their severance benefits.”

Abioye who said that Aero over the many years that it has served did not have a major incident or accident, called on government to reach out and save the airline.

Nigerianflightdeck is an online news and magazine platform reporting business stories with a bias for aviation and travel. It is borne out of the intention to inform, educate as well as alter perceptions with balanced reportage.
Previous Okewu’s Secondment: NAAPE raises questions on Abali’s involvement
Next NCAA says Aero, First Nation Airline still in business despite operation suspensions