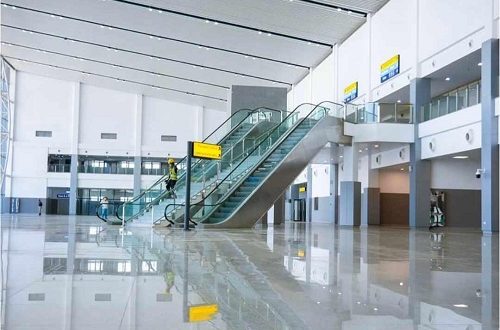 UNIONS have announced plans to embark on a nationwide protest against the planned concession driven by the Minister of Aviation, Senator Hadi Sirika and are seeking clarity on the concession already in place with the Chinese since 2013 on a $500m loan facility being utilized for ongoing new terminal buildings at four major airports scheduled some which have already come on stream.

This is just as the unions have accused the Minister of contravening FAAN Establishment Act, 2004 as well as the Civil Aviation Act, 2005 to serve his personal purposes.

Recall in 2013, under the President Goodluck Jonathan administration Nigeria in a bid to achieve world class status in its transport infrastructure got a $500m boost in the form of a loan from China to help pay for four international airport terminals and a railway. Read also: Unions question how Sirika obtained Compliance Certificate from ICRC

The four terminals been built by China Civil Engineering Construction Corporation (CCECC) s supposed to be for  20 months, but is still under construction till now as only two of the four airports have been completed and are in use.

However, this project has not been taken into consideration by the Minister who is hell bent on concessioning a concession that already exists, raising questions from the unions as to what is actually being concessioned, which no one has explained till date.

“There remains no clarity on the question of the semi-concession that already exists through the Chinese loan facility being utilised for ongoing new terminal buildings at the same four airports, including remodelling of the old terminals. There is yet to be any explanation on that.

“Equally important is the loud silence over the issue of primacy of national security, especially at this time and the foreseeable future. The rejoinder failed to situate, within the national security architecture, the potential fact of the four foremost international gateways being held in private (most likely foreign) hands.

“We hasten, though, to let it be known that we are unambiguously strewn to the national cause and the genuine interest of the workers of FAAN. We are completely extricated from any narrow, or selfish motives. Therefore, we shall remain unwavering in our stated commitment to deny this clandestine PPP the benefit of daylight.”

The unions in their statements also flayed Sirika for usurping of the responsibilities of Federal Airports Authority of Nigeria (FAAN) in the concession by the Minister of Aviation stating that the mode of operation of the ICRC is to deal directly with the concessioner Ministry, or Department, or Agency (MDA); which has not been the case.

” The mode of operation of the ICRC is to deal directly with the concessioner Ministry, or Department, or Agency (MDA); in this instance, the FAAN.

“But, as we all well know, FAAN has not even as much as do any project identification, or prioritization, or concept note to the ICRC on the concession of any airport in Nigeria to the ICRC as required by the publicly stated ICRC procedures. And the only role FAAN has played so far is that of a representative member on the Project Delivery Team and the Steering Committee as appointed by the Minister.

“Therefore, the ICRC and the Ministry, by carrying on with the airports’ concession project outside the purview of FAAN is indicative of an unwholesome agenda. Such action is, in fact, unlawful as it contravenes Part II, 3(g) of the FAAN Establishment Act, 2004 as well as the Civil Aviation Act, 2005.

“As a matter of fact, for a PPP project by an Agency as in this case, the only role prescribed for a Minister by the ICRC is that the Agency “would submit the FBC (Full Business Case) through the line Minister for approval”, by FEC, ostensibly.

“According to the National PPP processes of the ICRC, the Transaction Advisor (TA) is to be appointed through a “competitive bidding process”. We all know that the only way to assure a truly competitive bidding process is through open bidding. But in the case of this airports concession project, there was no such bidding exercise known to the public. As a matter of fact, we are aware that the Project Delivery Team were at a meeting discussing the issue of TA when they learnt that the FEC had just then announced the approval of the appointment of a TA. Magic.

“While we agree that the project delivery Team (PDT) is not an approving authority, we must nevertheless state that the PDT is a vital organ of the PPP process with definite functions and mandates. Its functions form the foundation upon which the success of the entire PPP project rests. Therefore, by circumventing the functions of the PDT as the ICRC and the Ministry have done, particularly by the clandestine appointment of Transitional Advisor (TA), there is a clear case of violation of the process as well as a travesty against the Nigerian people.

The unions further accused both Minister and the ICRC of colluding to share the common patrimony of Nigerians in the guise of a concession exercise that is orchestrated against the nation.

“On the strength of that, we shall stand firm against any attempt to share our common patrimony in the guise of a phony concession exercise. And we enjoin all Nigerians who love the fatherland to join us as we prepare for nationwide public protests to be kicked off shortly in order to compel a rethink in a positive direction. There is no going back.

Nigerianflightdeck is an online news and magazine platform reporting business stories with a bias for aviation and travel. It is borne out of the intention to inform, educate as well as alter perceptions with balanced reportage.
Previous Activities that shaped aviation during the week
Next Naija7Wonder Project set to brand Nigeria, drive domestic tourism recovery