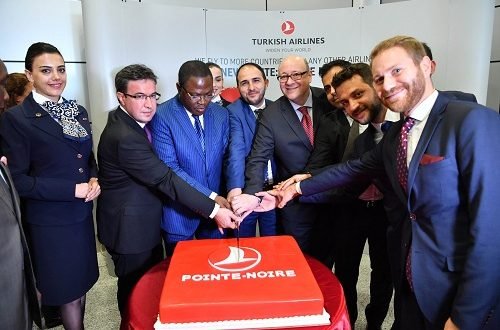 TURKISH Airlines has added Republic of Congo’s second biggest city, Pointe-Noire to its flight network as its 58 th destination in Africa.

The turkish National flag carrier will operate three weekly flights to Pointe- Noire with a connection in Libreville from Tuesday, Thursday and Sunday.

With Pointe Noire, the port city next to Atlantic Ocean, Turkish Airlines expanded its flight network to 125 countries and 313 destinations. Thus, flag carrier further cemented its position as the airline that flies to more destinations in the continent of Africa than any other airline.

During the press conference held for the opening of Pointe-Noire frequency, Turkish Airlines Senior Vice President for Sales (2 nd Region), Kerem Sarp said; “With this inaugural Pointe-Noire flight, we increased our destinations to 58 in the continent of Africa. As the flag carrier of Turkey, we cement our position as the airline that flies to more destinations in Africa than any other airline in line with our growth strategy in this continent.

Our new flights will offer new opportunities for us to increase our existing cultural connections in the Republic of Congo. We will continue to spread the Turkish hospitality and the continuous travel experience to a wider area in the future.”

Nigerianflightdeck is an online news and magazine platform reporting business stories with a bias for aviation and travel. It is borne out of the intention to inform, educate as well as alter perceptions with balanced reportage.
Previous Emirates expands services, to fly pilgrims from Nigeria, six others for busy Hajj season
Next UBA doles out N30m to 20 more customers in 3rd draw of Wise Savers Promo